Nuhu Ribadu Concur: Says “I Am Out To Get James Ibori” 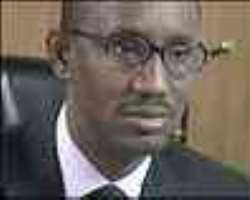 Erstwhile chairman, Economic and Financial Crimes Commission,EFCC, Mallam Nuhu Ribadu admitted publicly, today, that he was indeed after former Governor James Ibori, but not for the reasons adduced by the ex-governor at a press conference in Lagos on Friday. Chief Ibori had said that Mallam Ribadu was persecuting him because he (Ibori) turned down pleas by the former EFCC boss to lobby for his appointment as Inspector General of Police, and to get the election of President Umaru Yar'Adua in 2007 annulled.

Chief Ibori also denied attempting to bribe Mallam Ribadu with $15 million and cited alleged contradictory statements by Ribadu and his aides on the issue. But reacting from self exile abroad in a two page statement entitled, “Why I am after the Iboris of Nigeria”, Ribadu said: “Ordinarily, I will not like to dignify James Ibori, former governor of Delta State, with a response to the tissue of lies and cheap fabrications that he let loose in the press conference he held over the weekend. But it is important to set the records straight, particularly against one of those who perpetrated the worst heist against the treasury since Nigeria's independence.

“That Ibori is finally finding his voice after two years since his prosecution both at home and abroad started is a testimony to his desperation as the cases, particularly the ones in the United Kingdom, move toward legal resolution. I will address Ibori's fabrications one by one. First, he lied that I solicited his assistance to become the inspector general of police. I had it on record, while in office as the chairman of the Economic and Financial Crimes Commission (EFCC) that James Ibori was a double convict.

First, as a police officer and also as an anti-corruption campaigner who was committed to doing his part to rid Nigeria of rogues, how could I have been seeking the assistance of a convicted felon for the highest police position in the country? If I wanted to be IG, he would be the last person I will consider to help me.

“Ibori, just like the others we tried to bring to justice, is desperate and would do anything to escape justice as he has always done. Nothing emphasizes Ibori's capacity for falsehood and felony than his claim, at the press conference, that I “framed” him for attempting to bribe me with $15 million dollars. As he told the lie, and as I write this, the $15 million remain as an exhibit deposited with the Central Bank of Nigeria.

“I must state, however, that I am used to these types of allegations and fabrications by those who are struggling under the present circumstances to find a way out of their advertised felonies and crimes against the people. It has now become fashionable for all sorts of morally-bankrupt people to try to use me to do one thing or the other.

Any close observer of the events in Nigeria in the last decade would agree that what we were able to achieve as founders and operators of the EFCC was of a more fundamental nature, in the context of our urgent national crisis, than becoming IGP. But that is a matter for another day. People understand what we tried to do and recognize that the felons must be brought to justice so as to allow millions of our compatriots to enjoy their God-given resources.

“Ibori claimed that he could trace “the genesis of his ordeal to his staunch and uncompromising stance on a major electoral promise he made back in 1998 to the people of Delta State that he would champion the cause of redressing the injustice associated with resources derivable from their land.” I will only like to ask if it is in keeping with this “promise” that he became a billionaire overnight “on behalf” of the suffering masses of Delta State?

“As regards the allegation that Ibori made on the 2007 presidential election petition, let me state clearly that it is totally untrue. However, I am also aware that there is a whole industry of seeking favour from President Umaru Yar'Adua based on the legal tussle over the 2007 presidential election. Already, many fortune and favour-seekers have imagined many plots and many plotters in their attempt to deceive the man in power that I tried to scuttle the Appeal Court case on the election.

Many got offices, positions, and others and even got me out of the EFCC telling this lie to Aso Rock Villa. They continue to use it. If Ibori claims that I sought his support to truncate Yar'Adua's contested victory at the Appeal Court, is he claiming to have the power to influence the judges and pervert the course of justice?

“Finally, Ibori said he remained my “loyal friend.” I am also still open to his “friendship”, but that will never be at the expense of my loyalty to my fatherland and commitment to transparency and honesty in public office. I have a friendly advice for Ibori, though. Instead of wasting the money of Delta State people that he stole to pay lawyers all over the world, isn't it better as a “Christian” that he claims to be to return his loot to the people of Delta State and have peace with his God? If he fails to do so, at the appropriate time, no matter how much the Iboris of this world run from the law, they would one day be made to atone for their sundry crimes.

If they are able to bribe their way through in Nigeria and get men and women of questionable character appointed into office to shield themselves from prosecution, they cannot do the same in the United Kingdom and before God. But even in Nigeria, the protection that they enjoy today is temporary. Wait, James, still on our friendship, since I couldn't see you when I visited Lagos recently, why don't you visit me in London to catch up with your other friends!”