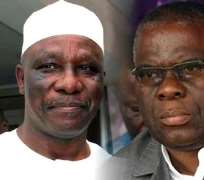 SAN FRANCISCO, December 16, (THEWILL) - The gruesome killing of the Kaduna State Governor, Mr. Patrick Yakowa, and the immediate past National Security Adviser (NSA), General Andrew Owoye Azazi (rtd), along with their aides and two pilots in an helicopter crash in Okoroba, Bayelsa State, Saturday, may just be yet another evidence of the dexterity and precision of the Boko Haram insurgents in dealing with perceived enemies, using collaborators within the system

For the people of Okoroba in the Nembe Local Government Area of Bayelsa State, Saturday, December 15,2012, would remain a dark day to some time to come.

It is also a day that would continuously haunt the Presidential Adviser on Research and Strategy, Mr. Oronto Douglas, as a ceremony that was envisaged to be a celebration of life for his late father ended in a disaster.

And if anybody had told the immediate past National Security Adviser (NSA), General Andrew Owoye Azazi (rtd), not to embark on that ill-fated trip that Saturday, he wouldn't have taken it lightly with the person.

Described as an officer and gentleman who served the nation to the best of his ability, he still felt he had to join other political associates at the burial ceremony, despite his inglorious sack from his position as NSA sometime ago.

And humility personified, the late Governor of Kaduna State, Mr. Patrick Ibrahim Yakowa, hopped into a private chopper, unaware of the fact that he was embarking on a journey of no return.

Unknown to the duo, a well-laid trap appeared to have been prepared for them and they were just dancing to the deadly rhythm as they set out for the ceremony. And as if they had a premonition of the fate that was waiting ahead, Yakowa and Azazi were together throughout the Church service.

But strategy struck as they embarked on the return trip. Yakowa, who came in a private chopper had to abandon it to join Azazi in a Navy helicopter en-route Port Harcourt. Five minutes into the return flight, the military helicopter exploded in the skies as it came down in flames, killing all the six persons on board, including Yakowa, Azazi, their aides and pilots.

Describing the accident, former chairman of the Okoroba Community Development Committee (CDC), Hitler Adunion, said: "We sighted the chopper wobbling and nose-diving before it crashed landed. By the time we got to the scene, it was already in flames. We tried to put out the flame but it was difficult. All the occupants were roasted beyond recognition."

Generally described as an apostle of peace, unity and development, the late Kaduna State Governor made no pretense about his resolve to ensuring that peace returned to Kaduna, which had been the hotbed of violence in the north.

On assumption of duties on May 20, 2010 as the 20th governor of the State, following the swearing in of his former boss, Mr. Namadi Sambo, as the vice president, Yakowa, in his inaugural speech gave an assurance to the people of the ethnically and religiously-mixed state. “I am governor for all, irrespective of religious or tribal affiliation,'' Yakowa assured.

He also maintained that his administration would pursue the sustenance of peace, equity and justice, while ensuring that no citizen of the state was subjected to any form of threat, intimidation and discrimination, irrespective of his religious belief.

The late governor, without doubt, achieved these to an extent, though he had to step on some powerful toes in the process and may have paid dearly with his own life.

As an experienced civil servant who understood the state and the system so well, he became a thorn in the flesh of troublemakers. And as a highly detribalised leader and a great troubleshooter, he gave religious bigots, fanatics and extremists a run for their lives.

It was therefore not surprising that the Plateau State governor, Jonah Jang, in a statement issued by his Director of Press Affairs, Mr. James Mannok, said he had lost "a gentleman, a friend and a confidant."

Expressing sadness over the demise of Yakowa, Jang said, "Plateau State has lost a worthy neighbour," whom he also described as "a committed partner in the peace process in Kaduna and Plateau States."

Gracious, Humble to the Last

Apparently gracious and humble even till death, those who saw Yakowa at the Church service in Okoroba on that fateful day would readily attest to his humility and calm mien. As if he was saying ‘bye bye’ to this mortal world, his countenance as he sat with Azazi beside the former special adviser to the President on Niger Delta Affairs, Timi Alaibe, and Nollywood actress, Rita Dominic, was as if he was having his last fun with Azazi said to be cracking jokes all through.

Though the late Kaduna State governor was not known to be controversial while alive, the manner of his death has however sparked off a fresh controversy. While it is true that Yakowa had always wanted to be his own man without being dictated to or teleguided in the ways he ran the affairs of the State, there was no evidence of any open confrontation between him and those who want the status quo maintained. But observers of his style of administration know quite well that he was, indeed, a thorn in their flesh.

There is also the religious dimension to the controversy as proponents of this argument are unanimous in their thinking that the latest accident in Okoroba may just be the climax of the grand plan by the extremists and religious bigots to rid the North of Christian governors.

With the Taraba State Governor, Danbaba Suntai, who is reported to be recuperating in a German hospital following the injuries he sustained when his helicopter crashed not too long ago, apparently off the political stage, Yakowa’s death may have sealed the deal for the apostles of Muslim hegemony in the North as his Muslim deputy, Yero, is now the new governor in accordance with the constitution.

Whichever way one looks at the unfolding drama, the death of Azazi and Yakowa, coming in such a manner, is, undoubtedly, similar to the way the late Deputy Inspector General John Haruna met his untimely death last year in a surveillance chopper crash in Plateau State on his way to Abuja to attend a security meeting. Haruna was deployed to the state following a Boko Haram Sunday bomb blast at St. Finbar’s Catholic Church.

And so many questions are now begging for answers, which only the duo could provide.

Observers of the development are quick to draw a logical conclusion that the Boko Haram apologists and sympathisers within the government, party and the security forces may have scored another goal.

The logic is simple and is based on the following assumptions:

Azazi had stirred the hornet's nest and rocked the boat when he shocked the ruling People's Democratic Party (PDP) and, indeed, the Federal Government at the Delta State Economic Summit in Asaba.

The then NSA, who had a huge war chest at his disposal, said that the war against Boko Haram was becoming difficult to win because the Boko Haram extremists had penetrated the party and government. His no-nonsense fire - for - fire approach was failing him and he did not hide his opposition to dialogue with the enemies of the state and people of Nigeria.

He was, of course, saying the obvious, not minding the way he was saying it, as President Goodluck Jonathan even acknowledged this fact but he was to be consumed by his uncompromising stance. Those who saw his outburst as an affront had to call for his sack. And pronto, he was booted out of office and consumed by the battle he was fighting.

The same goes for Yakowa who did not bother whose ox is gored in the effort to restore peace to the volatile state. His case was not helped by fanatics who saw him as an infidel who must be eliminated at all costs because he was a Christian.

And the Bayelsa village of Okoroba simply provided a great opportunity for the execution of the deadly plot that appeared to have been meticulously planned to precision.

Otherwise, why would the Navy helicopter explode mid-air only five minutes after it took off, burning all its occupants beyond recognition?

The Accident Investigation Bureau (AIB) has already foreclosed the possibility of any credible investigation into the accident, saying it was not mandated to investigate accidents involving military aircrafts.

THEWILL notes that the chopper did not crash-land but exploded before coming down just like the one that claimed DIG Haruna's life in Kaduna.

Funny enough, the report of the probe into the accident that killed DIG Haruna has not been released up till now.

And what would have made Yakowa abandon the chopper that brought him to the event and join Azazi on the return journey?

What was the unfinished business that had to be concluded even in death?

Why was there no other important personality on the ill-fated flight, except the "common enemies" of Boko Haram and their aides?

The two pilots and Yakowa aides as well as those of Azazi may have therefore been used as sacrificial lambs in the deadly game of political relevance and survival.

DIG Haruna has been silenced forever. Yakowa and Azazi have been sent on a journey of no return with Suntai's life at the mercy of God. Many more will still follow as the Jonathan administration remains helpless and clueless in this complex power game.

And the insurgents and their collaborators may just be having a big laughter now. But will they laugh last? Only time will tell.