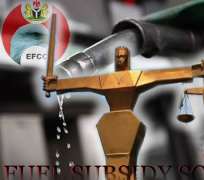 SAN FRANCISCO, December 06, (THEWILL) - Justice Adeniyi Onigbanjo of the Lagos High Court on Thursday refused to admit Oluwaseun Ogunbambo to bail and ordered that the defendant be remanded in prison custody pending conclusion of his trial. Ogunbambo who was recently re-arraigned alongside Mamman Nasir Ali and Christian Taylor for their alleged role in a two billion, two hundred and ninety eight naira, ninety seven kobo fuel subsidy scam was denied bail by the court on the grounds of criminal antecedents and the numerous cases pending against him. Justice Onigbanjo also cited the identify problem associated with the defendant.

Counsel to EFCC, Francis Usani had told the court that Ogunbambo’s travelling document had been confiscated by the EFCC in the past but that the defendant was still able to travel abroad after procuring another travelling document and using a different name. He further informed the court that Ogunbambo is equally the prime suspect in several other cases still under investigation.

In a related development, the trial of Ogunbambo, Habila Theck and Fargo Petroleum and Gas in another charge of fraudulently obtaining subsidy payment under false pretence preferred against them by the Commission continued before Justice Onigbanjo with prosecution witness, Abdul Rasheed Bawa, an operative of the EFCC, giving evidence.

He told the court that during investigation, the Commission wrote to the Nigeria Port Authority, to furnish it with information regarding the vessels that brought in petroleum products from 2006 – 2011. He said analysis of the information supplied by NPA showed that vessels which were purportedly used for the transactions, MT Diplomat never came to Lagos or Port Harcourt during the period as claimed in the transaction.

He said the Nigeria Maritime Administration and Safety Agency, was similarly asked to provide details of all vessels that came to Nigeria with Premium Motor Spirit from 2006 and 2011. “The response we got from NIMASA showed that the vessel indicated in the transaction, MT Diplomat did not come to Nigeria in the said period”, he said.

He equally informed the court that the Customs papers allegedly used for the transactions indicated Lagos, Nigeria as port of declaration instead of Port Harcourt where the said vessel was to discharge its products.

The witness explained that in the course of investigation Capital Field Investment Limited was contacted to explain its relationship with Ogunbambo and Fargo Petroleum and Gas Limited. The invitation, he said, was sequel to the fact that Ogunbambo claimed that it brought about 70 per cent of the Petroleum Motor Spirit that was imported by Fargo petroleum. He said that an official of Capital Field Investment volunteered information that the company was not in that line of business and never bought a single litre of Premium Motor Spirit for Fargo petroleum.

The prosecution tendered documents including petitions from the honourable minister of Petroleum and civil society groups which were admitted as exhibited despite objection by the defence counsel. Adebayo Adenipekun.

Adenikepun argued that it was wrong to tender such document as the necessary fee was not paid as required by law. But Usani countered that payments were not required as they were EFCC documents.

Oluwaseun Ogunbambo Fargo, Kabila Theck and Fargo Petroleum and Gas Limited are facing a 10 count amended charge of falsely obtaining the sum of N976, 653,110.28 (nine hundred and seventy six million six hundred and fifty Three thousand one hundred and ten naira twenty eight kobo only) from the federal government of Nigeria by falsely claiming that the said sum represented subsidy accruing to them for the importation of Premium Motor Spirit.