MADRID LOOKING FOR REVENGE AT LEVANTE 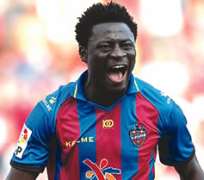 Spanish champions Real Madrid will be looking for revenge on Sunday when they visit bogey team Levante.

The whites have picked up just one point in their last two visits to Levante's small Ciutat de Valencia Stadium, but this time they cannot afford another slip-up.

'This is a really important game for Madrid,' said Radio Marca. 'They have to win in a stadium where things have gone wrong for them recently.'

Substitute Jose Callejon, who had a goal controversially disallowed in Tuesday's 2-2 Champions League draw against Borussia Dortmund, will probably make a rare start because Gonzalo Higuain and Karim Benzema both have muscle injuries.

Cristiano Ronaldo and company lost 1-0 at Levante last season and were held 0-0 two years ago.

Levante, the oldest team in La Liga, are currently sixth and their defence has conceded just one goal in four games.

Current holders Real Madrid have injury concerns ahead of the trip to Levante. Centre forwards Gonzalo Higuain and Karim Benzema are ruled out with muscle strains.

Sami Khedira also remains on the sidelines with a thigh injury but there could be a return ahead of schedule for Fabio Coentrao after he returned to training on Thursday.

For the home side Obafemi Martins will return to lead the line on Sunday as he was ineligible for their European tie with FC Twente on Thursday and fringe players Dariusz Dudka and Theofanis Gekas are the only injury absentees from Juan Ignacio Martinez's squad.