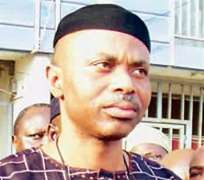 The incumbent governor of Ondo State, Olusegun Momiko of the Labour Party (LP) has been announced winner of the keenly contested election held in Ondo State yesterday, Saturday, October 20, 2012. Mimiko defeated his two other major opponents in the race for the Akure-based government house, Rotimi Akeredolu of the Action Congress of Nigeria (ACN) and Olusola Oke of the Peoples Democratic Party (PDP).

Mimiko was announced winner of the election by The Independent National Electoral Commission (INEC)'s returning officer and Vice Chancellor of the Federal University of Technology, Adebiyi Daramola today, Sunday, October 21, 2012.

Out of the 645, 597 accredited votes, the ACN's candidate, Rotimi Akeredolu got a total of 143,512 from the 18 local government area of Ondo State, the PDP's candidate, Olusola Oke polled 155,961 while the winner, Olusegun Mimiko of the Labour Party had 260,199 of the total valid votes.

Mimiko has now made history as the first incumbent governor of the state to be re-election into office as the governor of Ondo State. Michael Ajasin, Adebayo Adefarati, Bamidele Olumilua and Olusegun Agagu never got a second term to rule Ondo State.