…NOW WILL GOODLUCK JONATHAN (NOT) WIN? 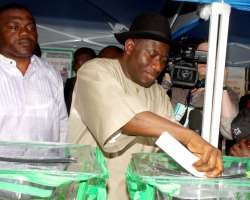 Yet again, the much-hyped, much anticipated merger talks between the nation’s two leading political parties – the South West dominated Action Congress of Nigeria [ACN] and the Northerly efficacious Congress for Progressive Change [CPC] has broken down – this time only three days prior to the presidential polls.

Conversely, it has been reported that within this same short but eventful period, the ruling Peoples Democratic Party has initiated smart overtures to pull a shock alliance with their fiercest political rivals the ACN. Reading between the lines as I observed the ACN’s National Chairman Chief Bisi Akande confirm the story, I am tempted to lean towards the confirmation of the political aphorism that in politics there are no permanent friends, no permanent enemies but only permanent interests.

By the way, I just realised that quite a large number of politically savvy Nigerians still do not know the constitutional requirements of winning the nation’s most exalted political office. Most people are not aware that clinching all the states in the entire Northern hemisphere of the country will not automatically make you the president. Others are ignorant of the fact that claiming the highest number of cumulative valid votes cast will not necessarily see you pronounced as the new president-elect.

Matter of fact, there are two prerequisites every presidential aspirant must meet to be qualified to emerge as the nation’s president-elect. Firstly, he must have the highest number of votes cast during the elections – more than any other contesting candidate; secondly he must secure at least one-quarter of the votes cast in at least two-third of the thirty six States of the federation and the Federal Capital Territory. In the event that the second condition is not met, a run-off between the highest scoring candidate and the second highest scoring candidate shall be conducted. cf. Section 134; sub-sections 2-4 of the Constitutional of the Federal Republic of Nigeria 1999.

Though it is said that one should never say never, in truth, as things stand it is rather unlikely that we will get to apply subsections 3 and 4 which captures the run-off scenario.

The implication is that for the ex anti-corruption czar, Nuhu Ribadu to precipitate joy of fulfilment in the face of his teeming followers, he will need to go beyond winning the six South Western states. In fact he has to acquire at least one in every four votes cast in at least another nineteen states (outside the South-West!), and ultimately emerge as the highest scoring candidate cumulatively.

Similarly, the no-nonsense disciplinarian Muhammadu Buhari must have to do better than what we saw about a week ago in the National Assembly elections where his party, the CPC showed marked absences in the lower half of the country’s map. He must have to garner the highest number of votes by not only winning the majority stakes in the Northern parts but also scoop a quarter of the votes in a few other states in the Southern divide.

Absenting rigging and any other unwholesome election racketeering, the CPC has the political wherewithal to sweep commanding votes across the nineteen Northern states and the FCT, but will definitely require the ACN to generously surrender a good portion of votes in her powerful six South Western states to make the minimum twenty five.

The ACN as inspired by the political iroko, Bola Ahmed Tinubu has a vice-versa case with the North as above.

In the light of the foregoing, one does not need to be a political guru to deduce that it is a near absolute impossibility for either Buhari’s CPC or Ribadu’s ACN to clinch the presidency without a merger or synergy of some sort between both opposition parties. No, definitely not, yes not even if the famous seer Prophet T.B Joshua suddenly says so.

Truth is, in politics, successes are not just wished for – they are worked for. So for the opposition, this mandatory political matrimony of necessity seems to be the most politically logical solution available as neither the CPC nor the ACN bear any tangible threats to President Goodluck Jonathan’s candidature in the South-South and the South-Eastern regions where the calls for Goodluck Nigeria! is already at an alarming deafening decibel.

Upon an objective analysis of facts and trends as re-confirmed by the results of the just concluded National Assembly polls, only the President’s ruling party bears the political capital to meet the two conditions to produce the president-elect. The PDP’s spread in Nigeria can only be matched by the popular MTN or Coca-Cola brands, and their candidate seen by many as an unassuming, patient gentleman of peace representing a much maligned but big-hearted minority geo-political region whose only notable Achilles’ heels is keeping questionable companies.

As if to drive the final nail into the coffin of the opposition, the President’s men have surprisingly entered into negotiations with the South Western opposition leaders. If a deal is struck as the author is tempted to believe, we will have a no-contest come Saturday April 16, as the elections would turn out just the same way the over-hyped January PDP Presidential Primaries turned out.

No matter the empathy we the poor Nigerian masses show towards the opposition, observing the trends and forms of recent events one fact is incontrovertible: we will continue to address Dr Goodluck Ebele Azikiwe Jonathan as the President and Commander in Chief of the Nigerian Armed Forces at least until May 28 2015.

The imminent re-emergence of Dr Goodluck Jonathan as President might not be a bad choice in itself after all, but like most other true Nigerians, the author would feel deflated by the opposition should the ruling party continue with the same inept, visionless, motionless and lacklustre leadership of the National Houses of Assembly. The poor masses have everything to realistically hope for if the ruling PDP under Goodluck Jonathan calls the shots at the Executive arm, while the opposition coalition checkmates their actions as the leaders of the Legislative arm of the government especially in the more realistic House of Representatives where the numbers so far favour the opposition coalition.

No doubt, if this scenario plays out, the administrative recklessness of majority of the last twelve years might just become history. It is only at such time that we can say thanks to Buhari; thanks to Asiwaju; thanks to Ribadu; thanks to Shekarau; thanks to Jonathan and welcome to true democracy.

May God deliver unto us the best leaders we need at this time; May He grant us violence-free elections.