THE HANGING OVER, LET US NOW FIND OUT WHO ORGANIZED THE ATTACK? 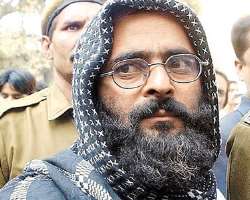 Afzal Guru has been hanged. Afzal was hanged so that 'collective conscience of the society could be satisfied.' Hopefuly, the collective conscience is now satisfied. The nationalists danced with joy, offered sweets to each other and burst crackers. The objective of hanging was also to probably close a chapter.

However, one question remains unanswered. Who plotted the attack on Parliament? The five who pierced the security to reach the Parliament building were shot dead on the spot. The investigating agencies claim that Masood Ahzar, Ghazi Baba and Tariq Ahmad, the main conspirators are in Pakistan and hence inaccessible.

The question then is who was Afzal Guru and what was his role in the attack on Parliament? Let us see the contents of letters written by Afzal Guru from jail and his wife which were made public quite sometime back.

Afzal was sentenced to death on the basis of Special Police version which works in collusion with STF which made him accept the crime under duress and threat by Special Police ACP Rajbir Singh. Special Police had threatened to harm his family members if he did not obey them.

Afzal was attracted to JKLF movement in 1990. He went to Pakistan for training, however, he got disillusioned soon as he did not support the pro-Pakistan groups. He stayed there for three months and returned to pursue his studies in Delhi . He was doing MBBS before he joined the movement.

With the intention of leading a normal life he surrendered to BSF. He realized very soon that it was very difficult to live as a surrendered militant in Kashmir . They are continuously harrassed by BSF, STF and security forces. The surrendered militants were obliged to follow their legitimate and illegitimate orders for the sake of security of their families. People who could pay were left alone. There was corruption even in this situation! Being a surrendered militant he could not have got a job and therefore started a business of medicines and surgical instruments in 1997-98 on commission basis in Sopore. Once, much before the attack on Parliament, a policeman Akbar of the Parimpore police station extorted Rs. 5000 from him and threatened to charge him with selling spurious medicines and instruments if he did not comply. Akbar became a witness against him in the attack on Parliament case. Afzal had to also pay Rs. 300-500 every month to Special Police Officers, who were surrendered militants assisting the STF, to keep them safe from the security agencies. Sometimes SPOs became the target of attack by militants.

One day he was going by his new scooter at 10 am when he was arrested by STF and taken to Palhallan camp. There he was tortured and Rs. One lakh was demanded from him. Then he was taken to Humhama camp where again he was tortured. He had to ultimately sell the jewelry of his wife which could fetch Rs. 80,000. The STF kept his scooter which he had bought for Rs. 24,000 just two months back. After these toture sessions one had to spend days to recuperate.

When Afzal was studying at Delhi University during 1990-96 he used to offer tuitions. This was known to Altaf Hussain, brother of SSP of Badgam Ashaq Hussain. Altaf employed him to teach his children. One day Altaf took Afzal to DSP Humhama Dravinder Singh. He was asked to accompany a non-Kashmiri man Mohammed to Delhi and help him find accommodation. He helped him buy a car and took him to meet different persons in Delhi that he wanted to meet. One day Mohammed gave him Rs. 35,000 and told him that he could go back to Kashmir if her desired. Meanwhile, Afzal, wanting to get away from life in Kashmir had rented a room in Indira Vihar and left the keys with landlady telling her that he would soon return with his wife and four year old son.

He reached Kashmir after the attack on Parliament. As he was preparing to board a bus to Sopore he was arrested by Srinagar police and taken to Parimpore police station. Rs. 35,000 was taken from him. He was brought to STF headquarters and from there taken to Delhi where he landed in Special Police torture cell.

During a press conference organised by Special Police when he told the media that his co-accused S.A.R. Geelani was innocent, ACP Rajbir Singh became angry with him and requested the media to delete that portion.

Afzal was told that it was in his and his family's interest to cooperate with the STF. He was taken to all those places from where Mohammed had bought different things. He was taken to Kashmir once again and brought back. He was made to sign on a number of blank papers.

Afzal was not given a chance in court to narrate his story. The judge told him that he would be given a chance in the end. His statements were not recorded and he was not shown what was being recorded. If merely the phone call records were examined it could have been seen how many times the STF called him. Until the High Court judgement was pronounced he had very little idea of how his case was proceeding as he could not keep an advocate of his choice.

It is quite likely that Afzal made up this story to protect himself. However, in case what he said is true it is a very serious matter. Afzal's only connection with the attack on Parliament is that he accompanied and helped Mohammed who seems to have a role in that attack. But them he was doing this on instructions from STF, something which was not accepted by the court. Wouldn't it have been appropriate to examine STF's role in the attack on Parliament to ensure that justice was done in this case. It is also STF's responsibility to come clean on this count.

If we do not investigate and find out who exactly plotted the attack on Parliament threat of such attacks in future will remain. For the sake of our security we need to find the truth in this case.