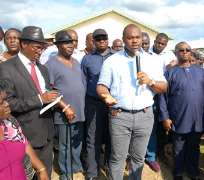 ASABA, October 10, (THEWILL) - The Speaker of the Delta State legislature, Rt Hon. Victor Ochei has assured victims of the flood disaster in the state of a coordinated and comprehensive package being put together by the state government towards ameliorating their harrowing plight.

He made this commitment during a situation assessment visit to victims of the disaster at various rehabilitation centres comprising the Institute of Continuing Education and St Patrick’s College in Asaba as well as the Ozoro and Oleh camps in the state.

The Speaker who was accompanied by the Deputy Majority Leader, Hon Johnson Erijo and Hon (Barr) Dennis Omovie, advised the victims to see the occurrence as an act of God which no mortal is capable of altering, and as such the emphasis and attention should be on coping and making the situation bearable, adding that, even as they (the victims) have lost prized property and sources of income, only God in his infinite mercies will also provide the proportionate succour.

He also instructed the camp officials to liaise with the Local Education Authority Secretaries in Local Government Areas, and ensure the engagement of the displaced children in educational activities, by providing make shift classrooms, adding that teachers in the affected communities should be engaged to provide tutorials as this will guide against their being lured into vices.

Hon Ochei equally requested the medical personnel on ground to put in their best, as this will be the veritable attestation of dedication to the cause of caring for humanity, as no one neither planned nor envisaged such circumstance.

The Speaker by the same token, intimated them with the government’s plans of exposing the victims to diverse skill acquisition programmes, as it will go along in expanding sources of income in the absence of the already existing ones, such as farming, fishing currently hampered by the ravaging flood.

He therefore implored them to bear with the government, as measures are already in progress towards providing relative comfort in this hour of need.