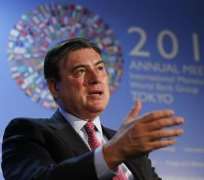 The International Monetary Fund urged European policymakers to deepen the financial and fiscal ties within the euro area with some urgency to restore sagging confidence in the global financial system.

The IMF's stark tone on the euro area debt crisis in its semi-annual checkup of the world's financial health was in marked contrast to the mood in Europe, where a European Central Bank decision to buy bonds of countries that accept an assistance program has removed immediate concerns about the survival of the euro.

"Despite many important steps already taken by policymakers, this agenda remains critically incomplete, exposing the euro area to a downward spiral of capital flight, breakup fears and economic decline," the IMF said in its Global Financial Stability Report (GFSR) released on Wednesday.

It said the euro area's debt crisis was the main threat to global financial stability, which had weakened in the last six months to leave confidence "very fragile".

The euro area's plodding progress means European banks are likely to offload $2.8 trillion in assets over two years to cut their risk exposure, an increase of $200 billion from a prediction six months ago, the IMF estimated. That could shrink credit supply in the periphery by 9 percent by the end of 2013, crimping economic growth.

The report adds to a gloomy backdrop ahead of the IMF's semi-annual meeting to be held in Tokyo later this week, which will gather the world's financial leaders.

On Tuesday, the Fund said the global economic slowdown was worsening as it cut its growth forecasts for the second time since April and warned U.S. and European policymakers that failure to fix their economic ills would prolong the slump.

A scenario where Europe muddles through, addressing haphazardly each new flare-up in the protracted crisis rather than adopting a comprehensive plan, would prove costly, Jose Vinals, director of the IMF's monetary and capital markets department and the main author of the financial stability report, said.

"The more time that goes by without a complete solution, the more are the eventual costs for everybody of resolving the crisis," he told Reuters in an interview.

Europe's troubles should also serve as a lesson to the heavily indebted United States and Japan that delaying the necessary policy adjustments until markets force their hands would lead to "harsher economic outcomes", Vinals told a briefing.

"We should not let the current market conditions, which have improved, lead to a false sense of security," he said.

Still, ECB Vice-President Vitor Constancio said his message to the IMF and World Bank gatherings is that Europe has made much progress in recent months.

"That should be encouraging for the world economy," he told Reuters in Tokyo.

SHRINKING BALANCE SHEETS
A German finance ministry source said in Berlin that the EU's most powerful member would strive to ensure that the debt crisis was not the sole focus of the IMF meeting.

Last week, Canada's Finance Minister Jim Flaherty expressed his latest sign of frustration over progress in resolving the crisis by saying it represented a "clear and present danger".

"Even if one is optimistic about the will and capacity to manage through this, you are still likely to see a very, very challenging growth environment in Europe for a long period of time," Geithner said during a visit to New Delhi.

On Tuesday, ECB President Mario Draghi said the bond buying program, although not yet in operation, provided a "fully effective backstop" for the euro zone to avoid destructive scenarios and had already helped calm market fears.

The IMF acknowledged that the ECB's bond buying agreement had restored some market confidence and narrowed the spread between core and peripheral debt in the region.

But private investors still lacked confidence in peripheral European markets and the difference between the yields on peripheral and core debt from banks and companies remained high, threatening any recovery, it said.

Under current policies, the IMF estimated European banks will shed $2.8 trillion in assets between the third quarter of 2011 and the end of 2013, higher than the $2.6 trillion it had predicted in April, further squeezing credit availability.

And if European policymakers do not fulfill promises to establish a common bank supervisor, and peripheral countries do not follow through with adjustment programs, the costs could be even higher, with $4.5 trillion in lost assets, and additional impacts on employment and investment. Supply of credit in the periphery could tumble by 18 percent.

The IMF said risks from the euro zone could also spill into emerging markets, where growth is already slowing. Countries in central and eastern Europe are the most vulnerable to financial shocks, given their exposure to the euro zone and their own entrenched external debts, the report said.

And while the United States and Japan have benefited from safe-haven flows away from the euro zone, the IMF said both countries need to do more to reduce their fiscal burdens in the medium term.

The U.S. faces a so-called "fiscal cliff" -- government spending cuts and tax rises due to take effect early in 2013. Japan is carrying the biggest public debt burden among leading industrialized nations at twice the size of its $5 trillion economy at a time when its social welfare spending is under constant pressure from a rapidly ageing population.

"The choice today is between making the necessary but tough policy and political decisions or delaying them - once more - in the false hope that time is on our side," Vinals said. "It is not."