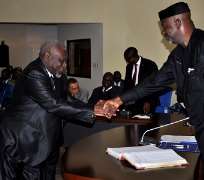 SAN FRANCISCO, October 08, (THEWILL) - Governor Liyel Imoke of Cross River State has restated the commitment of the executive arm of government to work with other arms of government for the overall development of the state and sustenance of democracy.

Imoke declared this during the swearing-in of Justice Okoi Ikpi Itam as the Acting Chief Judge of the state.

He promised to ensure the independence of the judiciary in the state, which he said is paramount to growth and sustenance of democracy.

The Governor called on the Acting Chief Judge to ensure the integrity of the judiciary because it remains the last hope for all not only for the common man.

“We are confident that your new office as the Acting Chief Judge will bring a fresh breath of energy and continue to introduce more reforms into the judiciary”, he said, adding that “as you settle down, you will make our judicial service more efficient and of better service to the people.”

The Governor also commended the outgoing chief Judge, Hon Justice Dorothy Iyamba-Idem, who spent 12 years as the chief Judge of the State for her service and wished her well in her new endeavour.

The Acting Chief Judge, Hon Justice Okoi Ikpi Itam in his acceptance speech, thanked the government and people of the state for the appointment and assured that he will ensure that there is order and good governance in the society.

Itam described the judiciary, executive and legislature as agents of development because they have collective role to play as well as protect the people without fear or favour.