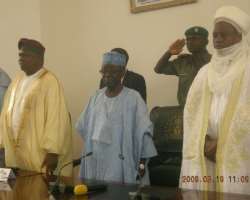 The Emir of Kano, Alhaji (Dr.) Ado Bayero has attributed the recurrence of communal conflicts in Plateau state to the inability of governments to implement recommendations put forward by committees or commissions of inquiry into such conflicts.

Receiving the Gbong Gwom Jos, Dr. Jacob Gyang Buba in his palace yesterday, the emir further noted that had it been appropriate disciplinary actions were taken against all those found to be involved in such conflicts, nobody would have dared to engage in such acts.

The emir also noted with concern how people in Plateau state have for years failed to uphold the gospel of peaceful coexistence, citing the example of Kano which is home to people from different parts of the country and has continued to be peaceful.

He therefore advised the Gbong Gwom to work towards addressing the issue with a view to finding a lasting solution to the problem.

Alhaji Bayero also tasked the federal government to see that the commission of inquiry set up to investigate the crisis discharges the task it is assigned effectively.

Earlier speaking, Gbong Gwom Jos, Da Jacob Gyang Buba had said that he was at the palace to solicit the emir's advice on how to bring peace in Jos and to prevent future occurrence of any conflict.

He then commended Emir Bayero for his contribution to the promotion of peace, humanitarian services in Kano and beyond as well as for sending representatives to attend the occasion of presentation of his staff of office.