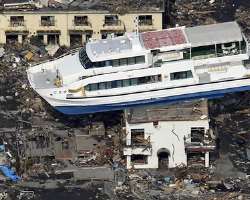 A large ferry boat rests inland amid destroyed houses after a 9.0 earthquake and subsequent tsunami struck Japan March 11, 2011. For anyone alive on the planet during 2011, it was hard to be unaffected by the massive earthquake that occurred off the coast of Japan. Only a handful of years prior, in December 2004, the great South Asian tsunami roared along the Indian Ocean, suddenly rising and striking the coastlines of nine nations. More than 250,000 people died, and millions more were left grieving and homeless. Scientists tell us that not only did this great disaster change the landscape of Asia, but it actually caused the planet to wobble on its axis.

But the physical shaking was not over. Nine and a half months later, in October 2005, another devastating quake struck, this time in the Kashmir region of Pakistan. It killed 80,000 people. Millions again were left without homes or shelter. Then, along with quakes in Chile and New Zealand, the horrific Haitian earthquake struck in 2010, and another quarter million lives were lost. Lastly, a huge 9.0 quake and subsequent tsunami struck the northeast coast of Japan in March 2011, raising the specter of a nuclear meltdown and widespread poisoning caused by radioactive contamination.

There is something happening in the earth. Massive earthquakes. Huge death tolls. Unprecedented storms. It may all be a coincidence, but I cannot help but call to mind the Lord’s Word, “Yet once more I shake not only the earth, but also heaven” (Heb. 12:26). There is certainly a great shaking occurring in the nations. Remember, Jesus warned that “great earthquakes” would be part of a variety of natural calamities, which He called “birth pangs,” that would introduce the end times (Luke 21:11; Matt. 24:8; Mark 13:8). In other words, He told us to expect natural disasters to increase both in magnitude and frequency, as though the earth itself was recoiling against the weight of sin. As Isaiah said, “The earth is shaken violently … it totters like a shack. For its transgression is heavy upon it (Is. 24:19-20, NASB).

If we are indeed living in the last decades of this present age, we should not expect the planet to remain calm or tranquil. God will use these calamities to draw multitudes to Himself, but we should be aware they will probably grow in severity. As disasters increase, so also will fear increase, but it should not be so with us. For it is also during this time that the Lord promised that the ruling powers of darkness will be shaken from their position of influence and rule.

Thus the Lord says in Isaiah, “It will happen in that day, that the Lord will punish the host of heaven on high, and the kings of the earth on earth” (Is. 24:21). Likewise Jesus warned that during the time of the end “the powers of the heavens will be shaken” (Matt. 24:29). Remember, the shaking of these powers denotes the “removing” of their place of influence and rule (Heb. 12:27). In other words, every demonic stronghold that hinders the coming forth of God on Earth is ultimately going to be confronted by the power and authority of heaven.

Even while the physical world will suffer birth pangs, I believe we are going to see other major “powers in the heavens” come down just as dramatically as the former Soviet Union. There will be unexpected but significant breakthroughs. Muslims by the millions will open to the gospel and find Christ as their Savior. This is the prayer frontier God has set before us right now. We will also see major demonic powers fall in the Nigeria. The demonic power that has blinded lawmakers and justices will be confronted and toppled.

It seems to me that we are living when, at least on some level, the “powers of the heavens” are being shaken. Our prayers and personal involvement in the affairs of life play a major role in toppling these powers of darkness. If we do not quit praying, we will see significant changes unfold before our eyes.

Finally, I think for most of us God has also been shaking the foundations of our lives, moving us from resting in ourselves to relying more fully upon Him. This shaking of our souls has been a force from Heaven, delivering us from religious traditions that are both unbiblical and impotent. As we return to the words of Christ, we are discovering the principles and power of His kingdom—and it is this renewed focus upon God’s kingdom that is establishing Christ Himself in the substructure of our thoughts and attitudes.

Thus the most important thing we can do is set the course of our lives upon walking in the kingdom as Jesus reveals it. Indeed, let us remember that, even while things on Earth and in heaven are being shaken, simultaneously we are receiving “a kingdom which cannot be shaken” (Heb. 12:28; Dan. 2:44; Matt. 24:14). Beloved, God has an unshakable kingdom to which He calls us. It is the place where Jesus rules as King, from which place every knee in heaven and on Earth shall bow.

Adapted from The Days of His Presence by Francis Frangipane, copyright, 2012, published by Charisma House. Prayer Power for the Week: “This week thank God for His unshakable kingdom and at the same time shaking the foundations of our lives and moving us from resting in ourselves to relying on Him. In the midst of all the shaking and turbulence ask Him to help you stand firm in your faith. Continue to lift up Israel and pray for its protection and an outpouring of His Spirit for a harvest of souls. Call out for unity among believers to pray in one accord and to establish His kingdom on earth. Pray for revival to ignite our churches and spread throughout the nation. Continue to pray for the upcoming elections and ask God to reveal His truth and guide you as you vote. 2 Chron. 7:14”