WHAT MORE DO THE RICH WANT FROM OBAMA 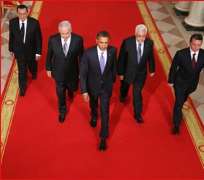 Many people bury their heads in the sand and may not have noticed that you cannot talk about the poor these days. If you do, you may be classed as a loser that wants what you did not work for. The best way to talk about the poor is to point to the dwindling middle class that used to be comfortable and enjoyed living in the same neighborhood as some of the rich. Many have fallen by the wayside and joined the poor.

It is the world's poor that should be mad at Obama, not the rich. One would think that the rich would be happy with Obama as they have increased their wealth on reduced taxes to the lowest levels in decades. Big Businesses have become richer as the poor became poorer in a world economy that lost many of the middleclass income earners. So while profit and productivity have soared, wages have been flat or on the reverse.

So why is the rich crying for more? USA Speaker Boehner got 98% of all he wanted from Obama but feared redistribution. It is not that the rich cannot get three square meals a day with desert and wine, lack luxurious cars and toys, humongous homes or save in Swiss banks, Bermuda and Carmen Islands. It's what global economy created by looking for the cheapest labor cost around the world for more profit. They want to squeeze the blood out of the poor and return them to serfdom. So, China workers are revolting now.

Since the global recession the poor lost pensions and savings, the rich are back to where they were as the stock is soaring again, banks and financial houses are flush with money after governments they hate bailed them out. Nigeria, Kenya, South Africa and Ghana copycats diverted money to personal banks, to buy back Public mines and companies under privatization. Any way you look at it, the rich are back making money as usual.

It can never be said enough that organized labor ended serfdom, child labor, got some days off, 40 hour work week and fair wages. Master to servant relationship turned to table of negotiations. At the same time strikes are becoming counter-productive and can only be effective when used as a last resort not every time negotiation breaks down. In a global market, employers have learnt to take their jobs to cheaper labor elsewhere.

If middleclass have to pay the full cost of tuitions, especially in charter lottery schools, adequate healthcare services; high cost of food, housing and transport, would have little left to live on as in Nigeria and Kenya. Another way of stating the same fact is even if the rich have to pay for the full cost of health services alone when hit by severe illness, they would become poor. Yet they ridicule the poor with vouchers since they are not in need.

The rich see the cost of providing healthcare, good schools, infrastructures and decent wages for most of their citizens as money diverted from businesses. If they can afford to provide each of these services, it should not be an entitlement or “free” for all. Let the poor fend for themselves – live free or die. The fact is the rich cannot even fend for themselves without the strong buying power of the middleclass, to create demands.

Need to get elected? Sway enough poor people to vote against their own self-interest. In return they promise them charity picked through churches and poor houses, chosen out of their volition only as they deem fit. They like big government to enforce morals on the rest of us. But they hate big governments as too powerful for asking them to give something back; unless they gain from the system they created in the first place.

It is a fact that small business owners can hardly pay union wages until they grow on starving wages but once they become more profitable, some of them do not remember the sacrifices of their employees while others return their profit by sharing or increasing wages accordingly. On the other hand, big businesses that make more profit, shed their employees, discourage organized labor fearing challenges and wealth redistribution.

South African miners were shot to death to protect the interest of mine owners that used to be union leaders turned bosses, in the government of the day. If it was in the interest of the white owners that police were protecting by shooting black miners to death, there would have been bigger uproar. These are rich blacks versus poor blacks.

Around the time Obama's father left Kenya, most of us were better off in Africa. We still remember when only talents, good schools and recreation were it; shared irrespective of ability to pay. Even cars were shared in those days. Share in the sense that we would hang around for rides or on windows to watch TVs. If you were going to church, mosque and picnics, it was a joy to pick up others' kids or grownups in your neighborhood.

USA is blessed with Obama to redistribute. Rich Africans need him; they share nothing and keep everything. It has to do with how they acquire their riches. In those days you would not dare steal from your people or village. On trust monthly esusu contributions alone generated wealth in the community. Those that ran away with it were very few. Whoever cleared contribution at the end of the month would put it into small business.

These days, you cannot even trust extended families not to talk of trusting politicians with your salary or pension. You will wake up one day and it is gone. Since the world has become a global village, selfishness of Me, Myself and I by copycats of other cultures have seeped into Africa and we are no longer our brothers' keeper. The only time we cooperate with one another notwithstanding ethnic background is when to loot.

Even many of us criticize until we get our opportunities to loot. This is the reason the rich are staying away from the poor knowing how they make their money. It breaks down the moral authority for children to look up to the rich as someone to emulate by playing the fair game of acquiring your own. Indeed what it does is the audacity to challenge and dispossess the rich. It creates bold face armed robbers knocking your door. Who is that? We are the armed robbers!