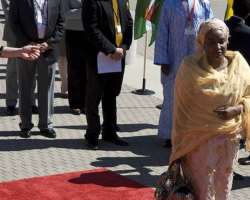 The pending rollercoaster of a political whirlwind brewing in the light of the Nation, Anambra, appear on the fridges of creating unlikely political bed partners salivating to consummate unholy but desired alliances. This is as the political parties in Anambra State are beginning to find grounds against the 2010 gubernatorial elections. Ukpakareports.com has gathered that Chris Uba has set his beam light on Peter Obi as the PDP flag bearer against 2010 as Turai Yar'dua unknowing of Peter Obi being the possible flag bearer - joined forces with Chris Uba's faction of PDP.

Information available to Ukpakareports.com indicate that the concern over the dust raised in the latent squabble in Anambra gubernatorial race has reached the office of the presidency and has over poured into the laps of the first lady, Turai Yar'dua. According to the information, a business mogul by the name Nicholas Ukachukwu who was a one time gubernatorial candidate for Anambra 2007 under the ANPP was reported to have reached a pact with the chairman of the PDP, Vincent Ogbulafor. The pact, which was sealed by an initial payment of N150million to Vincent Ogbulafor from Nicholas Ukachukwu, was to serve as the conduit to return Nicholas Ukachukwu to the PDP as the leader of the party in Anambra. Accepting the money, Vincent Ogbulafor was said to guarantee Nicholas Ogbulafor of being handed over the party.

However the plan as hatched by the duo of Ogbulafor and Ukachukwu did not play out. This was largely due to Turai Yar'dua's making. Information indicates that Chris Uba had through his back door connection to the presidency managed to scuttle the Ogbulafor/Ukachukwu plans. Ukpakareports.com learnt that the healthy relationship that exists between the cement importer from Nnewi, Anambra, by the name, Ibeto served Chris Uba an advantage in reaching out to the presidency. Ibeto was able to convince the Yar'dua family of the reasons Anambra PDP should be handled by Chris Uba. According to sources close to the Yar'dua family, the president and his wife bought the reasoning and thus have begun work towards implementing the agreement/promise. The recent 2,500 cars and motorcycles donated by Chris Uba to the PDP in Anambra were financed from President Yar'dua's security votes. This is in addition to President Yar'dua's instruction to Vincent Ogbulafor to consecrate Chris Uba as the official leader of the party in Anambra State.

In a manner favouring a game of intrigues, the ever dynamic permutations appear aggressively unrelenting as alliances from across party lines has injected a parabolic dimensions to the unfolding puzzle of quagmire in the making. As gathered, Peter Obi, the incumbent of the State, through his access to the State treasury has clandestinely exploited the fracas within the PDP. Ukpakareports.com gathered through impeccable sources that Peter Obi and major players within the party has reached a pact. The pact included prominent members of the party in the State. Peter Obi and Chris Uba, surprisingly has reached a pact to fight the re-emergence of Andy Uba in the PDP. Through this, Peter Obi has awarded numerous contracts to companies working for Chris Uba and in return Chris Uba has remained silent of the failed N250million heist by the Obi administration. In Peter Obi's estimation, the APGA gubernatorial platform appears increasingly a mirage. And in his calculation, Andy Uba and the aggrieved PDP machinery have a hand in the troubles within APGA. For this reason, Peter Obi believes the same trouble can be transplanted to the PDP. Our sources have it that the Anambra State PDP congress was scuttled via Peter Obi's collaborative work with the Tony Nwoye/Chumah Nzeribe/Ken Emeakayi faction of the PDP. The highly placed source told our correspondent that Peter Obi orchestrated and financed the recent fractionalization of the PDP.

In essence, the three major factions in the PDP in Anambra, as gathered, are working in cohorts with Peter Obi. As noted, the Nicholas Ukachukwu's factor which recently won a court injunction against the Chris Uba group are said to be in good working relationship with Peter Obi – and are wiling to mount Peter Obi as the consensus candidate. And the third PDP faction - which consists of the Andy Uba lead group, as expected found themselves on the other side of the aisle. In the words of a PDP member sympathetic to Peter Obi, the “PDP asks for revisit of N250million and rejects Chris Uba and Ivy-Oby Okoye's executive. Wants body of Stakeholders to conduct primary. This is unconstitutional, total and detrimental confusion in PDP”. Continuing, a former aide and confident of Governor Peter Obi in revealing to Ukpakareports.com of the developments and intrigues within the PDP added, “Gov. Peter Obi have disbursed N5million through Hon. Chuma Nzeribe and Hon. Simeon Ohajianya from Ihiala 1 constituency [Anambra State House of Assembly] to Ken Emeakayi to file a court action to become APGA State chairman”. Further confirming Peter Obi affiliation with Ken Emeakayi group is the former Governor of Anambra, Dr. Mbadinuju as he told Ukpakareports.com that “yes he [Emeakayi] joined Peter Obi since 2003 while he was still commissioner in my government, and today while with Peter Obi he is leading the campaign of Ukachukwu mercenary”.

But the neatly tucked plan by the Peter Obi group has of recent found its mounting share of glitches. The group as sources close to Orji Uzor Kalu's party indicates have started to dismantle their plan in place for more selfish quests. As gathered, Nicholas Ukachukwu has reached out to Orji Uzor Kalu seeking for admission in the party as its gubernatorial candidate in Anambra State. In Ukachukwu's take, he has the resources to match PDP, APGA, or AC candidates. It is unsure whether the head of PPA ascended to Ukachukwu's demands and/or requests. But the PPA, who currently find themselves in a dilemma over which candidate to produce as their flag bearer, find themselves unsure of what to make of Ukachukwu's proposals on the face value. The main financier of the party in the State, Arthur ESE, appears already to be falling out of favour with the party. This is while the former vice chancellor of Nnamdi Azikiwe University in the person of Ilochi Okafor, whom the PPA was to mount as a candidate has also, hit a dead end. Nonetheless, the chairman of the Board of Trustees for the PPA in talking to some of his close aides assured that President Yar'dua guaranteed victory for PPA in Anambra State as part of the agreement reached in the unity government deal 2007.

In all, what seem certain in the Anambra theatre of politicking are the uncertainty and the dynamic nature of the political musical chairs. That notwithstanding, the keys players in the game appear nonetheless to have made no secret of their leanings. What remains highly unpredictable is the underpinnings and behind the scenes card shuffling and the numerous court injunctions. Ukpakareports.com understands that Andy Uba and PDP block intends to work to deny Peter Obi of a political platform with which to vie for the gubernatorial office in 2010 while Peter Obi in turn intends to use the combination of Chris Uba and Ken Emeakayi to stop Andy Uba's emergence.