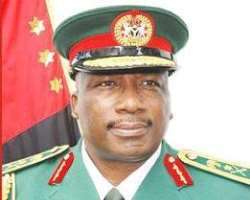 Information made available to huhuonline.com revealed that in January, 2008, the Chief of Army Staff, Ministry of Defence, acting for and on behalf of the Federal Government of Nigeria awarded contracts to Esquire Ventures Ltd; Profitel Ltd, Century Communications Ltd and Jonny-Way Investments Ltd ) for the supply of various specialist Military items to be used by the Nigeria's United Nations-backed Troops deployed to Darfur and Sudan for the total sum of One Billion, Two Hundred Million Naira.

Our finding revealed that between January and August 2008, these companies supplied these items to the Nigerian Army worth N660,000,000 (Six Hundred and Sixty Million Naira) notwithstanding the fact that they were not paid mobilization fees as provided by the said contract. Out of these amount only N175,000,000 was paid by the late Chief of Army Staff, Lt. Gen. Yusuf shortly before he was removed from office, leaving an outstanding balance of N476,000,000 unpaid.. Thus the cost of items fully supplied but unpaid for is N476,448,000 while the cost of items produced and ready for shipment is N530,700,000

Our checks revealed that when Lt. Gen Dambazau took over as the new Chief of Army Staff, the Military had just received Millions of Dollars from the United Nations in respect of these military items to be used by the Nigerian troops in Sudan . Rather than pay the contractors who supplied this items, the army czar instructed that the money be deposited in special accounts and used for other purposes at the expense of the contractors and the welfare of the Nigerian troops in Sudan and Dafur.

Following mounting pressures from the contractors, Gen. Dambazau set up two committees, one of which was headed by Major-General Azurunwa, to verify all contracts awarded by his predecessor. The Major-General Azurunwa committee after visiting all the depots where the supplies were made, and checking out all documentations from both the contractors and the supply depots, came out with a report which certified that the contracts were duly executed and should therefore be paid by the army authorities.

After the report of the Azurunwa committee over two months ago, the Chief of army staff mandated Major-General U T Usman and Major-General Charles to negotiate with the contractors to give the army some discounts on the outstanding debts and also to agree for the debts to be paid in two installments. Since then, the contractors claim, nothing else has been heard from the army authorities.

Sources revealed that these companies have made several demands on the Chief of Army Staff to pay for the Military items already supplied and honour the terms of the contracts but to no avail. Meanwhile, the money used for the execution of the contracts being borrowed funds from the banks continues to yield huge default interest rate of 30% against the companies.

Subsequently, the banks threatened to foreclose on the companies' collaterals for failure to pay back the loans. However, the companies have stopped further supply of these items to the soldiers in Darfur and Sudan as a result of this ugly incident.

Having exhausted all amicable means of urging the Chief of Army Staff to pay the outstanding sum and honour the agreement have briefed Festus Keyamo Chambers to give a formal notice of the reference of the matter to the Arbitration court and the appointment of J.B Daudu (SAN) as their arbitrator.

The contractors' claims against the Federal Government before the arbitration panel are as follows:

The Chief of Army Staff and the Federal Government are expected to forward the name of their Arbitrator within 15 days of their receipt of the notice.