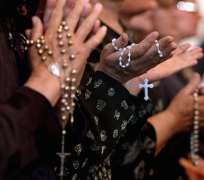 Imagine a world without the fear of Nemesis. Africans have to create the fear of God in a disorderly world where everyone is for himself and God for us all. Most of the religions believe in one God in one form or the other, so one would not expect any rivalry since converts would be attracted according to the goodness of each faith. Indeed the logical appeal for non-African religious diversion should be peaceful coexistence, not division.

Atheists everywhere are waiting to be proven wrong, to change their ways and succumb to the savior of each religion. Some of these atheists think the worst of religious beliefs as unscientific, brainwashing and cause of the worldly wars; expecting the poor and the weakest to fight on opposite sides only to be rewarded in heaven. When Africans were denied human origin and religion, they were taken as slaves, blessed and told to accept faith as written by new God. It generated some self-hate and complex.

New Muslim or Christian is unlike their original creation. Africans find it embarrassing that any of their countries is associated with these radical religions. Indigenous African religions are traditionally peaceful and hardly look for people to convert by peace, force or incentives. Therefore, it is sad that whenever there is some flare up amidst the new world radical Muslims, there is some echo in some Sahel part of Africa.

Nevertheless, Muslims were well tolerated in the Southwestern modern countries of Africa where people practiced their religions without hindrance. While tolerance of religion is the standard in Africa, Nigeria became the Country of two extremes where Usman Dan Fodio’s brand almost obliterated the Hausa great religion. Saving the Hausa from Boko Haram back into motherland with their brothers has become an elusive task.

What is undisputed is that the adaption of new brands of Christian and Muslim religions into African Empires of Ghana, Mali and Songhai were relatively peaceful compared to the coming of Usman Dan Fodio with his fire brand of Muslim across the Sahel. Black scholars have written about Christians before Christ in Africa. See this writer’s Oduduwa before Christ – Yoruba World Exploration and Yoruba Religious Model for World Peace.

By the time of crusade or jihad, forceful elements noted mostly amongst the Barbarians had crept into most religions apart from these two. The brutal behaviors of these crude people were adopted into the same religions that were supposed to civilize humans. The definition of civilize changed, which was simply the ability to get along with one another and coexist peacefully in the communities. They lost African origin of religion.

While some groups are stereotyped by the behavior of a few amongst them, it is up to their silent majority to rise up and lead in putting an end to the distasteful acts. Each time a loony punk head cloaked like a saint in freedom of speech, throw fire at Jesus, Mohammed or Buddha’s Siddhartha just to disrupt or put on hold our civilized way of life at their mercy, we cannot afford to always put world police and soldiers at alert.

We did not see uproar by Buddhists when Taliban Omar performed distasteful act in Afghanistan destroying the statues of the two Buddha they saw as idols worshiping in 2001. Actually most of the protest came from scholars, Christians, international cultural organizations and atheists denouncing elimination of our rich anthropological history. Before then Bamiyan statues were destroyed by Emperor Aurangzeb and another attempt was made by the Persian king Nader Afshar in the 18th century.

A great religion must not encourage alarmists to humiliate and provoke religious extremists amongst them to justify the suspicion of the atheists everywhere and communists that relegated religion to the underground in other to foster national unity. It has generated lack of trust and suspicion in countries that were once willing to learn from other cultures before this incessant violence anytime the name of a prophet is derided, be it that of Sango, Jesus Christ Superstar, Mohammed, Buddha, or Ogun.

We are at a boiling point where intolerance and uncivilized behavior has become the very weapon of mass destruction especially within Judeo-Christians and Muslims. Both claim Abraham as their father and share some prophets. We also know both religions suffered greatly in their early days in the hands of non-Christians and non-Muslims. This ardent belief in the face of adversities converted most around ancient Rome and Mecca.

Thinking about the amount of suffering and persecution the disciples of Jesus and their followers went through, one would never expect a crusade from the same people. So was Mohammed that had to flee persecution before he was strong enough to return in victory. Farouk was one of his persecutors until he changed sides only to be gracefully welcomed into the fold of the followers of Mohammed.

The fear of religions has never been greater because of violence associated with them. Some Muslims have become so easily provoked; few have created a culture that is at a discord with other democracies. While some countries like Indonesia show tolerance, it is not the same in Arabian countries and Pakistan. They restrict foreign religion in their countries but they take advantage of open societies to propagate theirs, outside home.

One professor at Harvard just came out with the hypothesis of Jesus as a married man. May be we should keep our fingers crossed, and brace for another riot. If Christian had gotten upset at every mention or less classy reference to their prophet, the Muslim could have found other ways to express their justifiable anger without actually rising up in arms to dislocate the daily life of atheists and innocent people like Boko Haram.

If religion wants to expand it base, the dwindling number of people going to Church or Mosques is not the way to do it. Many of those buildings are turning to museums. The beneficiaries are the new non-denomination believers of God filling their houses of worship with people, no matter their religious affiliations. Many have become the nouveau riche pastors at the expense of those looking for alternate means of salvation.

Some African pastors and imams claim they have taken their religion back and re-Africanized the religion taken from them. We will believe them when they stop exploiting their followers and start cleaning up their fetish behavior, though better than he fetish in religions of mass destruction.