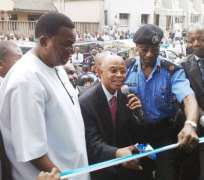 At last Savannah Bank Plc, one of the leading custodians of money market in Nigeria will resume operations soon, following the official return of its operations license on Tuesday (June 9, 2009) by the Nigerian Deposit Insurance Corporation (NDIC) in Lagos, Nigeria, in strict compliance with the directive of the court, after seven years of license revocation by the past Nigerian government.

In a statement credited to the bank's interim chairman, Richard Abraham during the relaunching of the bank, he affirmed:

"All legal matters concerning the bank have been concluded. Following the verdict of the Court of Appeal, I hereby return the license of the bank. I believe the management will take steps to restore the confidence of investors and reposition it to meet the yearnings as well as the aspirations of shareholders," Chief Executive Officer of NDIC, Ganiyu Ogunleye, said during the handing over ceremony held at the 25-storey building headquarters of the bank in the central financial district of the commercial city of Lagos.

The bank ran into trouble during the administration of President Olusegun Obasanjo which led to a protracted legal battle with its management taking the NDIC to court.

The Court of Appeal, in its ruling early this year, ordered NDIC to return the bank's license.

"Let me thank the Central Bank of Nigeria (CBN) and the NDIC for adhering to the court ruling. This action will definitely bring succour to the depositors, staff and share holders of the bank.

"I want to assure the general public that the bank has re-emerged and better positioned to render world-class banking services,"

Though the financial environment has changed drastically, the bank management promised to remain resolute in the delivery of banking services built on trust and integrity.

While shedding more light on the relaunching of the bank Mr. Abraham said the bank is coming back stronger than what the public envisaged. On behalf of the management Mr. Abraham further said they will work closely with the regulatory bodies to complete the full handing over of all assets of the bank located across the country (Nigeria).

According to him: "The process of relaunching the bank will be handled in a very deliberate manner in order to ensure that we would build a world class organisation that can compete favourably with other banks. Over the coming weeks and months, we will actively keep all stakeholders, including customers and shareholders, adequately informed about our plans regarding eventual take off."

Further, Chief Jim Nwobodo who was the former Chairman of the bank was one of the prominent Nigerians and stakeholders present at the event; he however use the opportunity to applaud the President, His Excellency Umaru Yar' Adua for creating an enabling environment in Nigeria for the dispassionate dispense of justice, in the interest of ordinary Nigerians, who have been long neglected.

"I want to assure our depositors, shareholders and customers that this bank will be run professionally. During the period of seven years, the banking environment has changed. We will engage the services of highly reputable consultancy firms to reposition the bank in order to meet current demands in the banking industry." Jim Nwobodo reassured.

Emmanuel Ajibulu is a Nigerian representative for modernghana.com with the mandate to cover political and entertainment newsworthy stories.