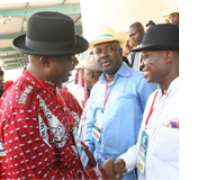 Recent surrender of arms and ammunition by some former militant leaders in the Bayelsa State axis of the Niger Delta, Nigeria's main oil and gas region, has sparked off a potentially dangerous political conflict in the predominantly Ijaw state.

The Niger Delta Patriotic Front (NDPF), a radical left-wing group that also favours arms struggle as a means of achieving justice for the peoples of the oil region, is alleging that the arms surrender by militants in the state was ''fixed'' by the state Governor, Timipre Sylva.

Accordingly, the group wants Sylva to resign as the governor of Bayelsa, claiming that they have lost confidence in him and his administration to deliver the state from poverty and repressive policies.

Central Co-ordinator of the group, Dan Anderson, told senior on-line editors in Yenagoa, the Bayelsa state capital, on Friday that NDPF wants the Bayelsa State governor to resign is position as the governor of the state due to his inability to govern the state properly.

But the media handlers of the governor in a swift reaction said they will not join issues with any group they do not know whose interest they are pursuing.

Although the Chief Press Secretary to the governor, Ola Doifie, could not be got on telephone, a male voice who spoke but refused to disclose his identity said, ''we will like to view this as a smear campaign from an unknown group that is working for some interest group''.

Apparently not disturbed, NDPF is warning that they will resist any attempt to ''fix'' the 2011 round of elections as usual in the state. ''We will like to insist that the 2011 elections must be free and fair and that we will resist any attempt by the ruling Peoples Democratic Party (PDP) to impose electoral candidates on the peoples of not only Bayelsa, but the entire Niger Delta'', Anderson said.

Continuing, he said, ''NDPF will use any means necessary to make sure that there is free and fair elections in this oil and gas region. We are demanding as a civil society group that the citizenry should be allowed to decide who will govern and represent them. We are also warning the ruling party not to use intimidation in the next elections, if truly they want to win. They should present credible candidates''.

According to him, the radical group will not accept what happened in 2003 and 2007 elections in the Niger Delta. ''We are of the view that continued support of the PDP is not in the best interest of the peoples of the Niger Delta. There is nothing on ground to show for our continued support of the so-called mainstream parties. The time has come for the peoples of the oil region to form their own party or look in the direction of others like the Action Congress (AC), Peoples Progressive Alliance (PPA), National Democratic Party (NDP) and the like''.

NDPF says they agree with Prof. Wole Soyinka that to keep Nigeria one, justice must be done, claiming that the on going ammesty is a fraud. ''The Federal Government is using the amnesty to shy away from the problem of development in our region.

There will be no peace in the region if the Abuja refuses to develop the region'', the group said.

For them, the interventionist agency, Niger Delta Development Commission (NDDC) and the Ministry of Niger Delta Affairs are fraud. They however, argued, ''if government truly wants to develop the Niger Delta, the N50billion they set aside for the rehabilitation of militants should have directed at the development of the area''.

In the mean time, NDPF says it is in full support of the Tompolo wing of the Movement for the Emancipation of the Niger Delta (MEND) for their stance on the amnesty, claiming that Abuja like the Timipre Sylva administration are not sincere with the initiative.