Atiku Back Calls To Restructure Nigeria 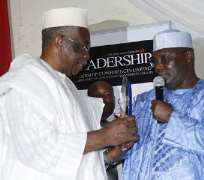 SAN FRANCISCO, September 18, (THEWILL) - Former Vice President Atiku Abubakar has thrown his weight behind the current clamour for the restructuring of Nigeria in a way that would strengthen the federating units of the country.

Atiku expressed his support to the issue in a speech he delivered as the Chairman of the Leadership Newspaper Conference and Awards ceremony held in Abuja on Tuesday.

Atiku, according to a statement from his media office, dismissed the fears that decentralization of power could threaten unity or lead to disintegration of the country.

While expressing his opposition to any agenda to hide behind restructuring to divide Nigeria by any groups, the former Vice President said the merits of restructuring in the light of changing realities of Nigeria should be carefully considered.

He said the excessive concentration of power at the centre, which was created by the military, had led Nigeria producing the most powerful President in the world.

With such excessive powers, he argues, the President could unleash security agencies on individuals or organizations, or turn the National Assembly as stooges in his hand.

The former Vice President said he is now converted to the idea of restructuring because rapidly changing realities make it inevitable.

According to Atiku, too much concentration of power and resources at the centre undermines the ability of other federating units to deliver social services effectively.

On state police, the Turaki Adamawa said there was nothing wrong with the idea as long as it might not be abused by state or regional governments.

Rather than abolishing institutions because of abuses or corruption, he argued that the best approach was to entrench constitutional safeguards to prevent such abuses.

The former Vice President called for an independent an efficient judiciary that could deliver justice faster like what obtains in the United States.

On party structure, Atiku called for an amendment to the constitution by the National Assembly to provide for two party system in the country because too many parties bring out ethnic, religious and regional fault lines of the country.