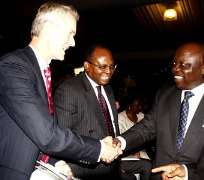 SAN FRANCISCO, September 17, (THEWILL) — Governor of Delta State, Dr. Emmanuel Uduaghan has identified the absence of reliable data on pollution in the Niger Delta region of the country as the responsible factor for lack of clean-up initiatives in the region.

Uduaghan stated this at the weekend at a town hall meeting organised in Lagos by Business Hallmark Newspaper and anchored by a top-rated British Broadcasting Service (BBC) presenter, Steve Sackur of BBC Hard Talk fame.

He decried the high level of land, sea and air pollution, saying “Apart from Ogoni, which pollution evaluation was conducted by the UN, no other data on the pollution of the region has been accepted by the western countries.”

He lamented that the absence of acceptable and reliable data on pollution has prevented the international community from assisting in the clean-up.

On other matters, he expressed dismay over the Federal Government Policy barring states from distributing their internally generated power, describing it as one that has stiffened power generation and distribution in the country.

He also spoke on the Delta Beyond Oil policy of the state government, assuring that it would create a brighter future for the state, as efforts are already afoot to develop infrastructure in order to generate investments.

Former Secretary General of Commonwealth of Nations, Chief Emeka Anyaoku topped the list of other high-profile personalities in attendance.