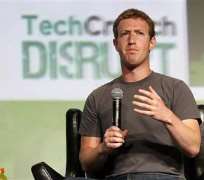 Facebook Inc CEO Mark Zuckerberg might need to talk more often. A 30-minute appearance at a technology industry conference earlier this week has translated into $6.785 billion in additional market valuation for his company.

Facebook shares finished Friday's regular trading session up 6.2 percent at $22 as Wall Street's confidence in the company continued to improve in the wake of the 28-year-old CEO's first public appearance since a rocky initial public offering in May.

Zuckerberg's comments, in which he highlighted mobile business progress, suggested Facebook could enter the search market and expressed confidence in future money-making prospects, have improved the perception of the stock, said Bhatia.

Zuckerberg has a reputation for spending his time building the company from the inside rather than going around promoting it to investors.

The Facebook Ad Exchange allows marketers to target consumers with pitches based on their past Web browsing activity, such as the websites they've visited -- a standard online advertising technique that until now has not been available on Facebook.

The world's No.1 online social network with 955 million users, Facebook has faced a rough debut since its May initial public offering. Investors and analysts have fretted about a sharp slowdown in its revenue growth. Shares of Facebook remain well below their $38 offering price.

The ongoing expiration of "lock-up" restrictions on Facebook insiders selling shares have added further pressure on the stock.

"I don't think they're completely out of the woods, but it does feel like the sentiment is improving," said Sterne, Agee & Leach's Bhatia.

The shares are up roughly 13 percent since Zuckerberg spoke at the TechCrunch Disrupt conference in San Francisco on Tuesday.