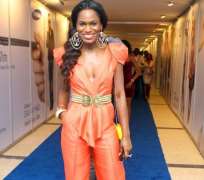 Yvonne Vixen, who is a reporter with popular Lagos TV station, Silverbird Television (STV) is yet to get over her car that was reported missing at the premises of Oriental Hotel, Lekki, Lagos on Saturday, July 28, 2012 .

Yvonne took her war against the hotel to social networking site 'Twitter when she tweeted series of tweets regarding the missing car.

She tweeted; "I'm ready for WAR. U can't take what belongs to me and expect me to stay Quiet for too long... They don't want to be civil, then I'll go STREET!

"Anyone who knows them should tell 'em sh*t is about to get CRAY. I'm fed up! How the hell should ppl feel safe in an establishment of that magnitude. U still my property 2day, what will happen next time? Get raped in d parking lot? *steal I meant.

"I didn't knw THEY had d jumanji option on their list of hospitality services. "Press 1 if u want ur belongings to disappear" #kmt.

"No, but seriously! If you were me right now, what would u do? Jeeez! Jesus save me from blowing the lid off this ish! #LordHaveMercy.

"We should create our own version of the Justice League... Eliminate all the Suckaz of the World!!!! #wooooooosah! Ok vixen.. down girl!! ... Done venting."

The management of the hotel could not be reached as at press time to comment on the issue.