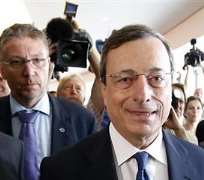 European Central Bank chief Mario Draghi faces the most decisive moment of his presidency on Thursday when he tries to heal divisions among policymakers and deliver on his promise to save the euro.

Investors want to hear how the ECB will start a new bond-buying program to help bring down the borrowing costs of Spain and Italy, after disagreements between bank policymakers over the plan were played out in public last week.

Germany's Bild newspaper reported that ECB Governing Council member Jens Weidmann, who also heads the Bundesbank, considered quitting over the scheme but was dissuaded from doing so by his country's government. His predecessor Axel Weber resigned last year over the ECB's first bond purchase program.

Renewed ECB intervention in the euro zone's bond markets is crucial for buying governments time to come up with a longer-term response to the bloc's debt crisis.

Investors are looking for Draghi to flesh out enough details of the plan to back up his promise on July 26 to do "whatever it takes" to preserve the euro when he speaks after the Governing Council meets.

"Expectations are extremely high. If the ECB does not deliver, we will get into another bad patch," said Gilles Moec, senior European economist at Deutsche Bank.

Spanish and Italian government bond yields have fallen significantly since Draghi said on August 2 that the ECB would buy bonds issued by Madrid and Rome.

ECB debt purchases - which would succeed the bank's Securities Markets Programme that has been dormant since March - would only resume under strict conditions and if countries first sought help from the euro zone rescue fund.

Markets have been expecting Draghi to unveil a bold plan after Thursday's policy meeting.

But while he is likely to deliver a framework for new bond purchases, he will give no details of planned amounts or explicit targets for yield spreads or levels of interest rates, two central bank sources told Reuters.

"A number of investors expect that the button will be pushed without further ado, but it is a bit more complicated than that," Deutsche Bank's Moec said.

SECURING MAJORITY SUPPORT
Securing majority support on the Governing Council for a plan that Weidmann can live with represents the trickiest balancing act Draghi has faced since he took over the ECB presidency on November 1 last year.

Weidmann has expressed concern that intervening in the bond market to reduce the borrowing costs of struggling euro zone countries such as Spain and Italy - which had reached levels that were unaffordable in anything but the short term - would break the ECB taboo of financing euro zone member states.

Weidmann is under pressure from within Germany, where former ECB chief economist Juergen Stark said the bank would take enormous risks onto its balance sheet with more bond buying.

"The political pressure on the central bank is massive," Stark, who like Weber resigned over the ECB's last bond-buying programme, wrote in Thursday's edition of Die Welt newspaper.

"What is worse: The ECB Council appears ready, by the majority, to give in to this pressure in defiance of its core duty and independence."

Other ECB policymakers see a greater urgency to help Spain and Italy to prevent the euro zone crisis from deepening.

One of the sources said the ECB is keen to attach strict conditions to its new programme. These will be enforced by the International Monetary Fund - which has a reputation for being tougher than European Union institutions - to keep up the pressure for reform.

Due to the paperwork involved in requesting such intervention, the source added that the ECB is unlikely to start buying bonds as soon as Thursday.

The Governing Council would decide on a case-by-case basis and keep close tabs on the programme, one source said, while the other source ruled out a shock-and-awe approach, in which the ECB would start off by buying huge amounts to impress markets.

The ECB was prepared to waive its senior creditor status on bonds it purchased - meaning it would be treated equally with private creditors in case of default.

"There is a problem if central banks insist on the preferred creditor status, because the more the public sector intervenes in the bond market, the less interest private investors will have," said one of the sources, who has seen preparatory documents for the Council meeting.

ALL ABOUT BOND BUYS
The terms of ECB intervention, which Draghi is expected to lay out when he reports the Council's decisions at a news conference at 1230 GMT, will determine whether Spain seeks help.

Prime Minister Mariano Rajoy said on Sunday that Spain, the euro zone's fourth largest economy, would consider seeking extra aid on top of an up to 100 billion euro rescue of its banks, but he wanted to see details of the ECB's programme before deciding.

Asked about ECB bond buying and a conflict of interest between Spain and Germany, Rajoy told Germany's Frankfurter Allgemeine Zeitung: "I understand Germany's concerns and know Germany's economic history ... the risk premium and difference in interest rates are rendering our efforts worthless."

"It is good to have principles in life. But sometimes it is also good to be flexible," he added.

Spain is in recession and a quarter of its workers are out of a job, meaning tax revenue is falling and this is undermining the government's austerity drive.

Economies in the euro zone are drifting further apart with troubled countries such as Greece, Portugal and Spain at one end of the scale and Germany still growing at the other. This means the ECB's record low interest rate of 0.75 percent is too high for some and too low for others.

One of the sources said the meeting would focus on bond buying, which meant there "would be no time to discuss interest rates".

"It's all about the bond programme," the source said.

The Council, however, is expected to broaden the list of securities banks can pledge as collateral at the ECB in return for cash, something that will be particularly important for Spain's ailing banking sector.