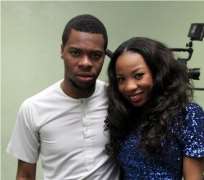 A source revealed to Nollywoodgists.com that both lovebirds have been seeing each other for over a year. BK, as Bukunyi is fondly called, is the younger brother of popular Beat FM OAP, Gbemi. The source further revealed that both families of Mo'Cheeda and BK are acquainted, though BK has not formally talked about marriage plans, but that there is every possibility of that happening any moment.

BK is said to be an oil and gas 'big boy' who also has investment in real estate and entertainment industries. The source confided in us that BK handles the management of Mo'Cheddah.

The source further disclosed to us that BK was with his heartthrob in South Africa recently during the video shoot of Mo'Cheddah.