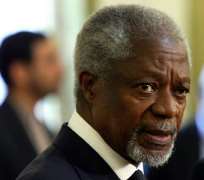 On February 23, 2012, UN Secretary-General Ban Ki-moon and Arab League Secretary-General Nabil El-Araby announced that former UN Scribe kofi Annan would serve as their high-level representative in the Syria crisis and would be supported by a deputy from the Arab world.

The statement by UN News Center reads: “The special envoy will provide good offices aimed at bringing an end to all violence and human rights violations and promoting a peaceful solution to the Syrian crisis. He will consult broadly and engage with all relevant interlocutors within and outside Syria in order to end the violence and the humanitarian crisis and facilitate a peaceful Syrian-led and inclusive political solution that meets the democratic aspirations of the Syrian people through a comprehensive political dialogue between the Syrian government and the whole spectrum of the Syrian opposition.”

Annan welcomed the appointment he considered an opportunity to serve the globe - once again.

A few days ago, I read an article, "Kofi Annan - A Big Fool For Accepting The Syrian Assignment" written by one John Elue Madu. Done, I wondered unremittingly why some commentators have bastardized freedom of expression. The write-up was delivered with shallow syllogization and jerky argumentations; overall it was a soporific commentary.

It is gratifying that Madu admitted he is "no foreign affairs expert", a statement that confirms his lack of understanding of world issues and politics. I hope he is aware he acted in contradiction by tagging Koffi Annan "a big fool" when he actually knows little or nothing. His damning verdict is a confirmation that the information at his disposal is only what he sees on CNN, Al-Jazeera and other news media.

Hear him: "Kofi sheepishly accepted the assignment like he was some superman who will convince the warring factions in Syria to cease fire and lay down arms by mere negotiation. Such level of naivety from a man of such International exposure, experience and accomplishment worries me a lot. What was he thinking? His involvement and eventual departure has seriously hurt his image and brand. He is now done with any mediatory assignments anywhere on planet earth including his own village in Ghana." Common, this is stark ignorance and I beg to differ. Annan's image tarnished? By who? By what? To start with, my brother should go back and check the defintion of image and brand.

It is foolhardy for anyone to openly give such blatant, reckless remark about a man whose only sin was heeding the call to serve the world. I am aware he never lobbied for the post; he seemed to enjoy his quiet life in retirement until the herculean task bellowed. Annan is not your average prominent figure; he is not the kind of person that would play to the gallery, so the question of him wanting to be a superman does not arise.

His acceptance cum mission as UN special envoy was a step in the right direction and deserves commendation. His success or otherwise should not be judged by the continued bloodshed except the writer is confusing Annan for God Himself. The man accepted the appointment because of his believe that someday, the voice of the people will triumph over the ammunitions and drone attacks of Assad's forces. He accepted because he needed to take the plight of Syrians to world leaders, giving them first hand details/account of the war within the country. He accepted because he was deeply that a leader will refuse to relinquish power even after his army massacred over 30,000 citizens in fifteen-months of uprising.

The people psyched by the arab-spring which consumed three leaders (Zine al-Abidine Ben Al, Hosni Mubarak, Muammar Gaddafi), surged in accord to take their destinies in their hands by demanding the ousting of a man enslaving his own people; a man that has arrogantly selected his own thirst over the yearn, sorrow, tears and slaughter of his compatriots.

It is patent that the former envoy's efforts were frustrated by egocentric world powers - Russia, United States, Britain and France. Barely hours after Annan's exit, these countries pointed fingers at one another over who was responsible for his sudden announcement he would depart.

In admiration of Ban Ki-moon said "Kofi Annan deserves our profound admiration for the selfless way in which he has put his formidable skills and prestige to this most difficult and potentially thankless of assignments”, while Vladimir Putin called him a "brilliant diplomat." British Foreign Secretary William Hague candid in his view. He held that Annan's frustration was due to vetoes in the Security Council, as the international community was unable to give him the support he needed and requested. He reiterated that Annan's six-point peace plan for Syria was "still the best option for securing an end to the conflict."

Annan himself gave an insight to why he resigned, stating that the continued arming of all sides in the conflict and the Security Council deadlock had undermined his ability to pursue a diplomatic solution."The increasing militarization on the ground and the clear lack of unity in the Security Council, have fundamentally changed the circumstances for the effective exercise of my role." That "Western powers, the Saudis and Qatar must start pressing the opposition to embrace a fully inclusive political process that will include communities and institutions currently associated with the government.” Also, in an editorial published on the Financial Times website, Annan was quoted as saying Russia, China and Iran "must take concerted efforts to persuade Syria's leadership to change course and embrace a political transition" - meaning the departure of Bashar al-Assad.

Without doubt, the charismatic Ghanian given what he met on ground, did his best to salvage a precarious situation and his good works will be remembered. The new Joint Special Representative Lakhdar Brahimi has started his mission and I wish him well. Someday - before long - the terror raptor will be conquered. Victory beckon on the strong-willed people of Syria.