ABATI: THE PRESIDENT YOU DON'T KNOW 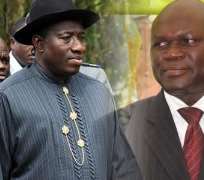 In the last couple of weeks, the Presidency via its media inner circle has been having it tough with critics, most especially the hard-nut-to-crack opposition parties, the ‘army of sponsored and self-appointed anarchists’ and also ‘the twittering, pinging, Facebook crowd of the new age’. This tough battle between the President’s men and the rest of the public is coming at a time when Nigerians more than ever before now see their leaders as some bunch of untrustworthy men who had promised heaven and earth, yet fail to send down the rain (apologies to Majek Fashek). It is for this reason why few individuals had to be recruited or to be ‘official’, appointed to help give credibility to a government believed to be the most cursed in the world. Of course, such appointments couldn’t have come at a better time, most especially when confusion within the presidency has further cut off whatever filial affection the vast majority of the people initially had felt with the government of the day. Okupe and Abati are one of such.

Abati, not known to be politically naive went all out few days ago to lash out at almost everybody who he believes ‘don’t even know why or how they should attack the President.’ This writer would not want to believe, like Abati claimed, is Mr. Aleseju! If Alaseju, however, is the Yoruba appellation that would simply make Abati see the obvious through this writer’s piece, then the better for us all. It is quite ironical that Abati claimed the Jonathan is a grossly misunderstood President, while arguing too many people are unfair to him, criticize him out of ignorance, abuse him out of mischief and lashing at the opposition who ‘doesn’t make things easy at all’. But if President Jonathan had not removed subsidy from fuel in January, had stopped the Boko-Haram menace, even though all to no avail, he continuously promises he was committed to nipping the menace in the bud, had fought the oil cabal who cheated the government and the vast majority of the people of their commonwealth and created an enabling environment for employment amidst other leadership responsibilities, nobody would give a damn. Since the country has moved from fry pan to fire in the last 15 months, with little or nothing to show for the growth and development of the economy and the social uplift of the people, who else is supposed to be make things hard for the President?

It is quite ironical that people like Abati who began his career as a public affairs commentator and fighter of reckless governments and their visually impaired policies is now the one who looks into the eyes of his progeny, claiming they are ‘wasting their talents lending relevance to thoughtless conclusions’. Abati got it all wrong with most of the issues he raised to support his paymaster. Abati claimed nobody was more committed to the Nigerian Project than President Jonathan, yet the Nigerian project is fast crumbling before our very eyes. The Ogoni and Bakassi secession threats are just one out of the many signs of a possible break-up as predicted by the US, while Boko-Haram have obviously made the country or the North ungovernable. If the President faces ‘unforeseen challenges which his administration has had to contend with,’ what exactly are the things he has done and intends to sincerely do ‘to positively transform Nigeria?’ It is not enough to proclaim words or make assertions like Abati did in his piece, without laying bare to Nigerians facts, therefore, the claim that ‘ordinary Nigerians know and appreciate this’ is balderdash.

If Abati had left the issue of the opposition out as critics of his paymasters, it wouldn’t have bothered much this writer, but because Abati failed to understand that these ‘leaders of the opposition who claim that the President has lost the support of Nigerians’ were only speaking the minds of millions of Nigerians, it can never be possible that they ‘represent only themselves and their selfish interests’. Abati should go out and get the performance and support ratings of his paymasters from Nigerians and see how well the opposition would have performed in the public opinion test. The Northern part of the country believes they do not have a leader since Boko-Haram keeps decimating them in their hundreds and by the day, the South-West who seem not to forget history still recall the subsidy removal and how the cabal still breath the air of freedom or where was Abati when tempers rose in that region as a result of the renaming of the University of Lagos to Moshood Abiola University through executive fiat? Kidnapping continues unabated in the South-East with a university Vice-Chancellor recently released from the kidnappers den. Many more scenes of violence and insecurity permeate that region with no viable solution insight or is the President still not committed to eradicating the menace? The South-South faces threats of secession, while skirmishes of militancy are felt week in and out. In short, with the unforeseen challenges which his administration has had to contend with, the opposition couldn’t have been wrong when they claimed ‘the President has lost the support of Nigerians’. Such statement of course does not portray them as pursuing selfish interests but patriotism to the nation and sincerity of purpose.

This writer wants to believe Abati was being economical with the truth when he argued the President ‘knows Nigerians want infrastructure. That is why he is telling Bi-Courtney to fix Lagos-Ibadan Expressway or get out. That is why he is telling a particular Minister to fix the East-West road and get it fixed quickly.’ Bi-Courtney should not be told to fix our roads; rather, the company should be blacklisted while those who manage it should be prosecuted for inefficiency and flagrant abuse of contractual agreement. The particular Minister who has continued delay on the East-West road should be sacked for not doing his job and made to face the full wrath of the law for causing unnecessary accidents on that road. With Bi-Courtney and the particular Minister, Nigerians are sure going to wait a very long time to get the needed infrastructures needed to survive. Abati should have told us when an infrastructure like our moribund refineries would start working; he should have told us when infrastructures like good hospitals would be built across the federation, he should have told us when infrastructures like portable borehole would be erected in places like the North rather than just displaying ethical professionalism.

If truly the President ‘has directed the relevant agencies to get corrupt persons to answer for their misdeeds,’ why have Nigerians not seen or heard of a high profile case prosecuted by the EFCC? The oil cabals still walk free and Abati knows this. The EFCC under its first Chairman had case files of former governors, yet nobody hears anything about it. The fraud in the Pension Office and Security and Exchange Commission still begs for prosecution, yet Abati claims what is not.

Of what benefit is it to Nigerians if the President runs a modern and open Presidency, gets access to Facebook, Twitter, email, SMS, BB, reads and writes, yet failed to feel the pulse of the people during the subsidy removal saga? Where was Mr. President when the intelligentsia, his immediate community and others asked that the rule of law should prevail at the last gubernatorial election in Bayelsa? Was that election not fraught with the highest form of impunity even when Nigerians pleaded for a level playing field? If the President needs the support of the people to do his work, how come he has refused to re-instate the President of the Court of Appeal, despite pleas from the masses? Of what benefit is it to Nigerians if ‘President Jonathan was the first Nigerian leader to appoint a woman as his Chief Economic Adviser and took affirmative action in political appointments to a higher level by reserving 35% of all appointive positions in government for our women folk’, yet more than 55% of Nigerian women are faced with poverty, disease, neglect and live below a dollar?

Abati loves to talk, talk, talk, bringing out issues without hitting on the facts behind the issues.

If truly the President does not spends billions on feeding and since he has enjoyed the privilege of eating at the President’s table, Abati should have been more sincere to have told Nigerians in his piece how much was allocated for feeding in the President’s 2012 budget. But for the outcry which was later cut to N700 Million, almost N1 Billion would have gone down the drain in feeding the President. What 150 Million Nigerians need is how food can get to the tables and not some stories of the ogogoro Mr. President consume or does not.

Abati has every right to fight for his paymaster, however, what Nigerians need at this critical period in the country’s history is how insecurity would be tactically tackled, how the millions of unemployed youths would be employed, how Boko-Haram would be reduced to a toothless Bull Dog, how power generation would get to 44,000 MW, how corruption would be doggedly fought, how the emergence of powerful oil cabal would be a thing of the past and how our roads, hospitals, education sector and all other facets of the society would return to its past glory. If these are not achieved soonest, Abati must be ready for more cynics, pestle-wielding critics, unrelenting, self-appointed activists, idle and idling, twittering, collective children of anger, distracted crowd of Facebook addicts and the BBM-pinging soap opera gossips of Nigeria and this time around, they would not be in competition among themselves to pull down President Goodluck Jonathan.