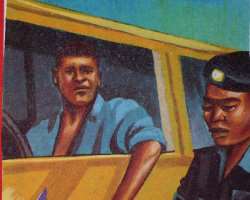 “The greatest incitement to crime is the hope of escaping punishment” (Marcus Cicero).

As far as Nigeria is concerned, we should think not what we can do to corruption but think of what corruption can do to Nigeria and Nigerians. We have made the above statement because of the level of corruption and the sequential reports of corrupt practises in Nigeria. On the average there are new cases of corruption reported weekly on the Nigerian dailies. The rates are very alarming.&nb sp;We are also 99% sure that many cases of corruption do not make headlines mainly because the go unnoticed by the press or the law enforcement agents. For the purposes of space and time, we will examine few cases of corruption in last 12 months to buttress my point. We will start with the power probe.

The National Assembly revelled that $16 billion dollars was invested in power sector without anything to show for it. This investment was made without any single megawatt being added to the national grid. To make matters worse was that some contractors didn't even know the sites. Talk less of doing any job. Where is this money? Am sure $1 billion out of this amount can build about 3 new refineries. $1 billion should be enough to do a second Niger bridge across River Niger. $1 billion can build a low cost housing estate in Lagos or else where in the country. $1 billion can build a well equipped hospital in Nigeria thereby stopping our government officials from flying abroad all the time for medical attention. $1 billion can be used to create jobs for at lease 10,000 Nigerians. $1 billion can provide maximum security prisons where corrupt people can be sent to. The list of what the money can do is endless.

Towards the end of March 2009, the Nigerian dailies reported that the Economic and Financial Crimes Commission (EFCC) arrested 2 comptrollers of Customs over an alleged complicity in a 3 billion naira customs duty scam, involving the controversial Vaswani brothers. The Vaswani brothers are the owners of Stallion Group. Their head office is in Victoria Island Lagos.

Then came the Halliburton $150 million dollars bribe money traced to Zurich. The total amount was $180 million dollars, which means that $30 million dollars is yet to be traced or found. This bribe was paid to facilitate the award of $6 billion dollars LNG contracts. My argument is that the $6 billion which was the quoted contract sum would be about 20 times the initial costs of the project. The federal government should conduct more enquiries and ascertain how much the original cost of the contracts should have been. This is with the view to knowing how much was actually stolen.

At the heat of the Halliburton bribe money discovery, President Yar'Adua promised the nation that once he has a response, he will make public the names of the culprits and take appropriate action. As part of taking his action, he inaugurated the Okiro Panel. The committee has eight weeks to submit its report. We are waiting and watching how it will go. To be fair and to achieve a balance, the president should name every person involved in corruption henceforth. A good starting point will be to name those behind $16 billion dollar unaccounted resources invested in the power sector. Until he does this, many Nigerians will tend to believe the accusations made by Mallam Nasir el-Rufai that the federal government is insincere in the fight against corruption.

Guardian newspapers of Wednesday, 22nd April 2009 online version reported about the African Petroleum (AP) Plc's share price manipulation scam that made AP to suffer over N240 billion losses. The culprit in this case was named as Mr Eugene Anenih, the managing director of Nova Finance and Securities Limited.

As if there was a competition, the following day being Thursday, 23rd April 2009, Thisday newspapers online version reported that the suspended chairman of the National Electricity Regulatory Commission (NERC) with six other commissioners were being charged for fraud of N1.5 billion naira.

Thisday newspapers of 7th May 2009 online version reported that 3 house members including a serving senator of the country are on the run over a N6 billion naira rural electrification contract scam. The same paper reported about officials of the Universal Basic Education Commission (UBEC) arrested over N1.7 billion naira contract scam. Thisday newspaper of 8th May 2009 online version reported the story of N250 million bribe scandal given over the Ekiti re-run elections.

Guardian newspapers of Wednesday 13th May 2009 online version reported an allegation made by the special adviser on petroleum to President, (Dr Emmanuel Egbogah). He alleged that some members of the national assembly have taken bribes from some oil firms to truncate the federal government's reforms in the petroleum sector. The amount was not mentioned.

Just recently, Nigerian dailies reported about the arrest of one Mr. Ejike Onwosugbolu who was carrying N250 million naira cash on three suit cases. On interrogation, he confessed that the money belonged to the present Anambra State governor (Peter Obi). Nigerians are waiting for what the EFCC will do about this case.

“The greatest incitement to crime is the hope of escaping punishment”(Marcus Cicero). Corruption has prospered in Nigeria mainly because corrupt government/private officials have a way of escaping punishment. It also shows the mindset of these evil people. Quoting former Justice Oputa, “Nothing will happen in our nation, in our society which did not first happen in our minds. If wrong is rampant, if indiscipline is rife, if corruption is the order of the day, we have to search our individual minds for that is where it all starts”.

Prevention is better than cure. Our simple advice to the authorities in Nigeria should be to fashion out a preventive strategy against corruption. Secondly the authorities should consider making corruption a capital offence. We can borrow a leaf from China on the best way to fight corruption. The political parties were the indicted national assembly members are from, should take disciplinary actions against them. But before then let them refund their loot to the people of Nigeria. Nigeria and Nigerians both young and old have suffered a lot of damage and misfortunes from the hands of our corrupt leaders, the time for paradigm shift are now.

Our leaders should again beckon on God to seek forgiveness of sins through attendant injustice, molestations, double taxation, retrogressive and inhuman activities their citizens are often subjected to. It is shocking to know that a Lagos State Traffic Management Authority (LASTMA) official who purportedly received a bribe of N10,000.00 would be sent to jail; but we've seen a number of leaders (at the local, state and federal level etc) have been indicted of corrupt practices involving billions but these officials are seen gallivanting about, and some even enjoy police protection, this is quite disheartening and pathetic.

Corruption is every where in the world, but the difference is how various countries approach it. When the expenses scandal involving British MP's became open in the United Kingdom, the Tory leader (David Cameron) ordered senior conservatives to pay back thousands of pounds to the tax payers. The Tory leader humiliated several members of the shadow cabinet by naming them one by one on the national television. He ordered all the people involved to return the total amount claimed. He apologised to the nation for the actions of his party members. In same way, the Nigerian parties were the corrupt national assembly members are from should apologize to Nigerians.

America is also another to place to look out for how to deal with corrupt people. A good example should be Madoff who master minded one of the biggest fraud in history. He was sentenced to 150 years in prison. Nigerian authorities can do same at home if the federal government is true to its fight against corruption. The time is now when the needful should be done so that prosperity will judge us right. If no tough measures are taken, corruption will continue to win the battle against corruption. May God bless Nigeria.