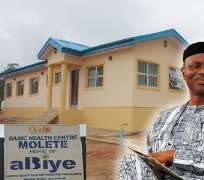 The Minister for National Planning, Dr Shamsudeen Usman did not mince words when after a visit to Ondo state, he adjudged it the pace-setter in terms of Community Development in the nation.

They both spoke at the flag-off of Micro Projects Programme (MPP9 )held in Akure the Ondo Stae capital.

Governor Mimiko had used the occasion to disclose that his administration has spent over N3billion on the execution of 425 projects in the various communities of the state in last three years with over 300 of such projects completed.

The MPP9 is an EU-FG intervention programme covering the nine Niger Delta States of Abia, Akwa-Ibom, Bayelsa,Cross River, Delta , Edo, Imo Ondo and Rivers States. It is aimed at reducing poverty in the rural and sub –urban communities in the region.

Dr Usman said at the occasion that steps taken by Governor Mimiko in community development is commendable describing his approach as standard.

He congratulated the government and the people of Ondo state for this enormous achievements which he said speaks volume of the good works the state government has been providing.

“As the National Authorizing officer of EU programmes in the country, i feel honoured and privileged to be associated with this success story” Usman had said at the event.

Head of the European Union delegation in Nigeria, Ambassador David MacRae said the success story of Governor Mimiko in Community development and health will be taken back to his home country to emulate as he said the main purpose of MPP9 is to reduce poverty of rural and semi-urban communities in Ondo state and other Eight Niger Delta states through the promotion of participatory and gender equitable local development governance.

Flagging off the programme, Mimiko said apart from spending over N3billion on the execution of community projects, N129m will be disbursed to those communities that have embarked on self help projects, saying more communities will benefit as soon as they are qualified.

Advancing reasons for the success so far recorded by the Mimiko’s administration in the area of Community development ,the state’s Commissioner for Information, Mr Kayode Akinmade said Governor Mimiko’s determination to develop and impact on the people positively through implementation of different development programmes, commercial innovations and creating an enabling environment for partnerships and investors is the rationale behind the developmental programmes for these local communities.

Akinmade said the need to bring the people close and restore their confidence in the government as well as give them a sense of belonging instruct the government’s decision to begin early in the regime to affect the lives of the people in the rural communities.

He disclosed that as early as the government’s two year anniversary, Community projects worth over Three hundred and fifty million were commissioned by the state Governor adding that so far, the Government has erected projects in over four hundred communities in the state.

These projects, Akinmade said are part of the Quick Win Confidence building projects of the administration using its 3i’s initiative.The 3i’s initiative is designed by the state with a special focus on rural and community development, using the participatory , community –driven "bottom –up with top down support" approach.

The initiative was designed to rebuild the confidence of the people in government through the provision of basic infrastructure, implementation of community projects such as electricity, water, access to primary health care and education within rural communities.

Through the initiative, the government identifies existing institutions and encourages the setting up of new ones and supports such institutions by building their capacities and providing financial support for development. In the area of Industry, the government identifies potential and viable industries within the communities that are now being expanded to encourage commerce and generate income for the people.

To achieve the aim of the government under this initiative, teams are usually raised from time to time to visit identified communities to determine projects desired by them. It is whatever projects the natives demanded that are committed to native contractors who are resident within the community and well known to the residents while details of the contract are made open to the community members.

The reasoning is that if a community member is contracted to handle a job for his or her locality, he will have other indigenes to contend with should he decide to breach contractual agreement relating to the contract thereby speeding up the completion of the project.

Before the latest approach, rural dwellers had lost confidence in the government as promises made to them in the area of infrastructure provision by successive governments were never fulfilled. This was the initial challenge the Mimiko government was confronted with.

An instance of such apathy against the government was the scenario that played out in Oyin village of former police chief, SundayEhindero.

When the government initiated its community development idea and a team was raised to visit the village, they were chased away.

According to the people, all developmental projects that have taken place in Oyin had been through self effort because successive governments that promised one thing or the other never redeemed those promises, hence they were not ready to be taken for a ride by yet another government.

News of the occurrence did not go down well with Dr. Mimiko who insisted that officials of the relevant ministry should go back to the village and convince them that his is really a sincere government that should be given the opportunity to demonstrate its sincerity. This approach worked wonders as the natives welcomed back the visiting team and demanded for a Town Hall. And about two months later, the Town Hall was delivered and has since been in use.

Within the space of just two years, the Mimiko-led government had demonstrated so much passion and commitment to the rural development in the state such that about 400 confidence building projects, gulping N2, 594,795.00 were executed in 305 communities across the state. Some of the projects erected in these communities include cottage, basic health centres, classrooms blocks, culvert, open market stalls, and solar-powered boreholes and staff quarters, among others.

As part of its efforts at giving the communities their pride of place in the scheme of things in the state, the government added colour to its National Community Development Day celebration in November 2011 when a total of 17 self –help projects already in progress in selected communities in the pilot LGAs Owo, Ifedore and Odigbo were granted additional aid to the tune of N83 million to fully implement their projects.

The amount is from the N500 million that the government had earmarked for self-help programmes for 2011. Many more communities in other LGAs have been earmarked to equally benefit from this government’s gesture.

The consensus, even among the opposition, is that there has never been any government in the history of Ondo state that has affected the rural community as much as the Mimiko- led administration has been able to do, yet the government’s total package for the rural communities is just unfolding.

In the new Ondo State, rural communities have become as attractive as urban centres. One unique feature of the Mimiko administration is that it has been able to develop simultaneously both the rural and urban centres to stem the tide of migration from rural areas to urban areas. This unique feature of the administration has earned its pilot, Dr Olusegun Mimiko the tag of Sogbe di Igboro, a Yoruba slogan that translates as one who transforms rural areas to cities. That indeed is one of the hallmark of the Iroko Revolution being witnessed in the Sunshine State and the revolution continues.