AKEREDOLU SHOULD BE CALLED TO ORDER 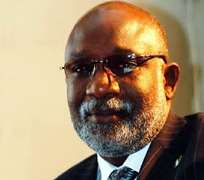 Chief Oluwarotimi Akeredolu, SAN is someone I cannot deny my respect being a senior colleague in our noble profession, however, his desperation to become the governor of Ondo State without following the rules we all profess as Legal practitioners is bringing him out as a flippant politician that lacks substance.

This can be seen from his serial, venomous and unprovoked attacks on the government and the good people of our beloved state when he is expected to discuss and ventilate issues that will enhance the socio-economic development of the people in the state.

It is worrisome as well as painful to note that since the commencement of the gubernatorial campaign, Akeredolu and his party, ACN have been issuing statements that are divisive and volatile in nature which may cause public disorder in the state.

It is also bothersome to note the insensitivity exhibited by Chief Akeredolu, a Senior Advocate of Nigeria who should have known better, to claim that the state government has imported arms that comprise over 100 AK 47 rifles, shotguns and others into Akure, the state capital, to facilitate the electoral fraud without a proof to substantiate his claims.

He further alleged that mercenaries are being recruited to cause trouble in the state during the election.

This is the height of unintelligent political permutation that has no basis than to cause panic, fright and anxiety methodically encoded to discredit a political rival without being considerate to the general security and well-being of the state.

I therefore challenge him to discuss issues and stop the spurious campaign of calumny as I urge and call on our traditional rulers and elders in the state to call him to order.