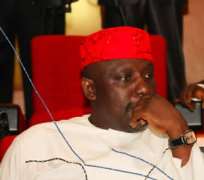 Imo State is one of the 36 States of Nigeria with Owerri as its capital and largest city. The State came into existence in 1976 along with other new States created under the leadership of the late military ruler of Nigeria, Murtala Muhammad, having been previously part of East-Central State. The State is named after the Imo River and is rich in natural resources including crude oil, natural gas, lead, zinc. Imo State is made up of twenty-seven Local Government Areas. Last month, the Governor of Imo State, Owelle Rochas Okorocha sold the eleven specialist and general hospitals in the State to Lantech Solutions Ltd, an Abuja based firm. This action has immediately removed millions of low-income people in the State from affordable medical services. With the stroke of a pen, Governor Okorocha knowingly condemned millions of Imolites to death via this sale of Imo State owned hospitals, which makes him guilty of crime against humanity.

Specifically, Governor Okorocha has set into motion a plan that will hike up the cost of medical services in our public hospitals which more or less equals to "murder and ill-treatment of civilian populations," through the removal of medical services from the reach of the poor. We all know how costly it takes to get treatment from a private hospital. This pro-capitalist and counter-productive policy will as usual yield a harvest of mass sack from our public hospital and bring higher waves of crimes in Imo State. For this action, you all can agree with me that Okorocha should resign.

Governor Okorocha would be judged to have known or should have known that he was carrying out such heinous crime. True, his case may not be the biggest genocide as compared to Charles Taylor, but as the documentation shows, his sale of the eleven public hospitals in Imo State if allowed to stand can be reasonably projected to kill more than 4000 people within the first six months alone due to lack of access to affordable health care! The poor will no longer afford medical treatment in Imo State.

We say No to the sale of our public hospitals .This must be stopped. Let us put the whole deceitful cabal in Imo state, of which Okorocha is the emperor, on notice that their fascist policies will no longer be tolerated. Currently resident doctors in IMSUTH are on strike. Doctors in other public hospitals in the state will soon embark on their own strike over this wicked sale. What did Owelle do? He is putting the blame as usual on PDP. To him PDP is instigating the doctor’s strike. Every failure on his part is blamed on PDP.We must stop playing politics with the future of Imo State.

Okorocha should resign for policy blunders and for systematically dismantling of Imo State LGA system. He destroyed the third tier of government in Imo State and imposed an illegal fourth tier government on the people. He should resign for looting our council funds. Where are the monies for our LGA’s for the past 15 months? Currently, all activities at our LGA’s are ‘halted’ due to his illegal actions. We say enough of the lawlessness in Imo State. This lawlessness is about to combust, a combustion that is likely to swallow up the state like no other event since the state’s creation. The illegally sacked LGA Chairmen are set for war; Okorocha also is set for war with the sacked council chairmen.

Okorocha should resign for his unattainable policies. He was at it again when he made a policy statement that his government will establish two more Universities in the State. This was specifically to deceive the Owerri people to justify the unforgivable relocation of Imo State University to his village,Ogboko in Ideato-South LGA .How can a State own three Universities? Is it practicable when the only State owned University (IMSU) is inadequately funded? Is this not the joke of the century?

We say ‘RESIGN NOW’ to the fascist (Okorocha) for sacking 10,000 Imo Youths from job. Okorocha sacked 10,000 legally employed workers via radio broadcast. The employment of the 10,000 was approved by the State House of Assembly and the state Civil Service Commission. The recruitment was conducted through due process. Advertisement was placed in national newspapers. There are laid down Civil Service rules to follow in the sack of any Civil Servant.I don't think we can afford even another year and a half of this government’s economy-busting wrecking ball. It's time for Owelle to resign. Each time he opens his mouth, Imo economy suffers. Every time he speaks, he shows himself as more out of touch with the state, its people, and their needs. Where are his advisers and commissioners?

It is only in Imo State that contracts are awarded orally. In Imo state, due process in the award of contracts has been thrown to the winds. Only friends, brothers and acquaintances of Okorocha get contracts. No tender, no advert and no contract bidding, no costing. The process begins and ends with him and the exercise can take place anywhere without prior arrangement or notice. He awards contracts running into millions of naira orally. The State is today burdened with debt of over 100 billion naira owed contractors who were given jobs without papers. This haphazard arrangement has led to one job being awarded to two different contractors simultaneously and this had led to serious financial complications to investors.

Only in Imo State that a Governor lie on oath severally in litigations which resulted to the recent FG interventions on sacked council chairmen. Only in Imo state that 40 percent of the 13 percent oil derivation fund is denied the oil producing areas through diversion and placement of embargo on the account of the commission (ISOPADEC) charged to manage the funds. Only in Imo that a Governor closes all LGA’s through ridiculous holidays to avoid the exposure of all his shady and dishonest miss-management of the 27 LGA funds of the state for the past 15 months. Only in Imo State that DAGS,HPMS and Treasurers of LGA’s are forcefully held in Hotels . Only in Imo that a governor double- speaks on all issues. Save us o’ God.