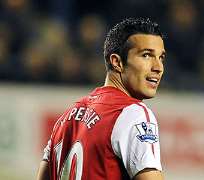 Despite Sir Alex Ferguson's positivity, the Old Trafford owners are draining the club's finances while selling off shares in their 'brand' around the world

Manchester United's signing of Robin van Persie has delivered a blast of the ambition which the glory, glory football club is supposed to stand for, after a summer dominated by the shabby details of its owners' float on the New York Stock Exchange. To make sense of United since the US-based Glazer family bought the club and loaded it with £525m borrowings in 2005, it has always been instructive to wonder where the Reds would be had the US corporate raid never happened.

The signing of Van Persie is the boldest of statements for the forthcoming Premier League season, and a reminder of what might have been, if the Glazers had not inflicted their leveraged takeover on United, which has since cost the club over £550m in interest, fees and charges. Van Persie is United's first truly major signing of an outfield player – with due respect to Ashley Young and Phil Jones – since the club paid £30.75m for Dimitar Berbatov on 31 August 2008. That was the day Sheikh Mansour bin Zayed al-Nahyan bought Manchester City, and from then, with Mansour intent on pouring almost £1bn in, the opposite of the Glazers' financial drain, United's signings have been eclipsed by City's.

Sir Alex Ferguson's justifications have never quite convinced; his assertion that the owners, whom he pronounced "great" this summer, have made enough money available to him but he declined to spend it because there was "no value in the market." The transfer market can be considered obscenely inflated, but it works both ways and United never spent the £80m received from Real Madrid for Cristiano Ronaldo on replacement players of similar class. Instead, the enduring Portuguese puzzle of Bébé aside, Ferguson signed good players of promise including Jones, Young, Chris Smalling and Javier Hernández. The manager repeatedly insisted he was not inhibited by the Glazers' draining the finances, but asserted he was only interested in footballers of youth, who would develop.

The hauling of the 37-year-old Paul Scholes out of retirement last season, while City were powered to the title by his world class opponent in midfield, Yaya Touré, 28, bought for £24m, exposed United's vulnerability from successive seasons of declining to land established stars. The Van Persie signing, bitter for Arsenal, swipes that away; he is 29, and is being bought for what he can do now.

So this is a taste of the buying power and the A grade ambition United could be expected to have wielded had the Glazers not swooped in 2005 to buy what they describe, in their heart-sinking flotation prospectus, as "one of the world's most recognisable brands." The acquisition of Van Persie came a week after the flotation was finally achieved, at a reduced price of $14 per share, the jarring re-registering of the famous Manchester United in the Cayman Islands tax haven, and the choice of New York to trade its shares.

United's Old Trafford-based chief executive, David Gill, and London-office sited vice-chairman Edward Woodward, have pointed in support of the Glazer ownership to United's much-envied sponsorship deals and doubling of income, from £159m in the eleven months to 30 June 2005, to £331m for the year to 30 June 2011. However critics, most prominently the Manchester United Supporters Trust, who campaign for a genuine fans' stake in the club, have always argued bitterly that the Glazers' running of United is designed to serve the family itself.

Malcolm Glazer and his six children, "lineal descendants" as the flotation document bloodlessly described them, have conducted a text-book example of a leveraged buyout, loading the money they borrowed to buy the club on to United itself to repay. Amid all the detail, and widespread criticism, of the New York float, for offering to traders a club still £423m in debt despite the £550m drained out since 2005, two points are most central to understanding it.

Following the worldwide attention focused on the financial manoeuvrings, which came after an abandoned plan last year to float in Singapore, the Glazers ultimately only floated 10% of Manchester United in New York. When they announced on 3 July their plan to float, the Glazers stated that all the money raised would be from selling new shares, and would be used to pay down the debts they loaded on the club. "We intend to use all of our net proceeds from this offering to reduce our indebtedness," the original prospectus, said.

When the flotation actually happened last week, it turned out that the Glazers had changed their intention, and in fact were helping themselves to half the proceeds. They sold some of their shares, and only issued five per cent new shares. Of the $220m (£140m) earned from selling the Manchester United (Cayman Islands) shares to investors, only $110m (£70m) has ultimately been banked by United. The Glazer family themselves have been paid the other £70m.

Reducing the debt by only £70m after all this fuss and effort, at 8.75% annual interest, will save United £6m in interest a year. As the investment analyst and critic of the Glazer leveraged buyout Andy Green has pointed out, the saving in interest is exceeded by the $12m (£7.7m) it has cost United in lawyers and other fees to float, following the £7m costs incurred for the aborted flotation in Singapore. The costs of hocking United around the world are coming out of the club's share of the proceeds, not the Glazer family's.

The US-based venture capitalist Michael Moritz, who has financially backed companies with huge growth prospects including Google, has repeatedly been scathing about United's float. He has insisted that the Glazers' financial draining of United for their own interests should be considered by the old-fashioned description: asset-stripping. Although the Glazers never explain themselves publicly, Ferguson, Gill and Woodward have always defended their running of United. Now, with Van Persie, United have found the money to sign a genuinely top class, fully-formed footballing asset, for the first time in years.