MY HERO PASTOR IS A FALSE PROPHET (part 2) 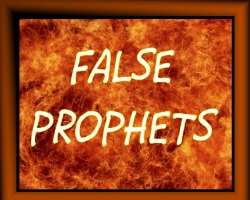 The false prophets of Nigerian extraction have the notion that they are gods, therefore when a religious faithful happens to get wearied of their antics and decide to leave the congregation for another; they use the pulpit to castigate such. They make no effort to know why people are leaving, rather they heap curses on those escaping for their lives. Some of them go on to pray witchcraft prayers for their fleeing members such that all the seeming breakthrough, security and finances obtained from their place of worship disappears after a while and the parishioner is left in a sorry state as evidential lessons for others who want to toe the same line. A popular prophet in Nigeria had a cousin whom he healed of blindness and after some years the said cousin discovered that his prophet used to disappear into the streams near the worship centre, perturbed by the constant discoveries, he decided to leave the church. The prophet warned him that the blindness will return if he leaves. He ignored the prophet and left and his blindness came back months after. He was carried from church to church in the South West and South East between 2002 and 20003 until God intervened. However, they do not frown when others abandon their former church for theirs.

These false prophets usually pay more attention to the wealthy and influential members of their churches at the expense of the poor and hungry ones. Once the tithe and offerings from the parishioner is not fat enough, they are not given attention. Apprentice pastors are assigned to look into matters concerning their poverty stricken members while they devote hours, days, weeks and months of fasting, prayers, and deliverance for the influential members and release all sorts of anointing on their head. Their spiritual eyes always watch over the wealthy ones while the impoverished will have to contend with evil spirits without any help. They forgot that Jesus groomed groups of fishermen and others until they became a force to reckon with.

These false prophets equally reserve special seats in their churches for these influential members and their families. These rich men are quickly converted to pastors, elders, deacons, deaconesses due to their financial maturity rather than spiritual maturity. When other church members see how spiritually empty moneybags are granted pastoral and presbyterian privileges, they develop an impression that without money the Church and even God does not recognize them. That is partly responsible for the craze of Nigerian church goers to loot national treasury to impress their pastors, priests and prophets and receive titles in the church.

These false prophets live a life of sexual immorality. They have sexual affairs with choristers, ushers, sanctuary keepers and different categories of church workers in the church. It is part of conditions for release of strange powers to a pastor. Since the powers used to do miracles are not of God, they more they commit sexual sin, the more anointed they become to see more visions, prophesy and do wonders. When concerned members draw their attention to their immoral life they rebuke them and quote copiously verses like '' touch not my anointed...''( psalm 105 vs 15) , '' there is therefore now no condemnation to them which are in Christ Jesus..''( Romans 8 vs 1), ''judge not that ye be not judged..'( Matthwe 7 vs 1)' among others. Instead of repenting and asking God for grace to overcome sin as Jesus told the adulteress in Matthew 8 vs 11''11 … And Jesus said unto her, Neither do I condemn thee: go, and sin no more.'' Jesus also said to the man He healed of sickness of 38 years at the Pool of Bethesda in John 5 vs 14 "…See, you have been made well. Sin no more, lest a worse thing come upon you''

Therefore. Jesus enjoined sinners to sin no more while the false prophets conjecture excuses while iniquity should be tolerated. In the past when a pastor or church member misbehaves, the senior pastors gives them back sit for a while until it is proven that normalcy has returned. Those so sanctioned equally accept their punishment and will be absorbed back into the fold at the end of the suspension period. This serves as example to others that iniquity is not part of the church. The system has changed and nobody has control over others and the church members are getting confused the more.

There are false prophets in every denomination. The Roman Catholic Church has a strict process of determining whether a priest or brother exhibiting charismatic gifts is of God. Priests with charismatic powers like Rev Fr's Ede, Njoku, Mbaka and others in Nigeria passed through some scrutiny before their Diocese and their Congregational Orders gave them clean bills of health to operate beyond the normal limits of the church. In older Pentecostal fellowships like Assemblies of God, Grace of God, Apostolic Church, Scripture Union, etc some level of scrutiny is given those operating charismatic powers to ensure that strange powers are not in operation. The Pentecostal Fellowship of Nigeria, in recent times, is finding it difficult checkmating the activities of strange powers among people claiming to be Pentecostals. Some of these people are actually converts from some white garment churches and some shrine attendants and native doctors who refused to relinquish strange powers they used before they turned their enterprise to church-they are not Pentecostals and they refuse to submit to PFN authority.

A Church member who has doubts over the genuineness of his pastor should go through the check lists earlier enumerated in part 1 and 2 and if still in doubt, should pray, fast and seek God's clarifications. God is ever willing to shine light through darkness and once seriously solicited would find a way of confirming it through the revelation in the Word of God (2 Timothy 3 vs 16), inner witness of the Holy Spirit (Acts 11vs 12), dreams (Matthew 1 vs 20-21), visions (Acts 10 vs 9-18) counsel from matured Christian leaders (Proverbs 12 vs 15), audible voice of God (Acts 9 vs 4-5), angels ( Luke 1 vs 26-38) among others.. Once there is enough confirmation from God that your Hero Pastor is a False Prophet, then it is time to escape for life as lot and his family escaped from Sodom and Gomorrah. The church member should prayerfully ask God for an exit strategy especially to avoid the satanic curses and vendetta emanating from these servants of devil whenever their secret is exposed.