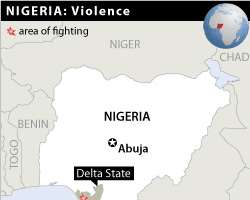 Aid agencies are unable to access an area in the Niger Delta where more than 2,000 people are believed to be hiding in the bush after a military offensive against militants forced families to flee their homes.

Security forces have cordoned off the area as their operation continues.

"Our mandate is to provide relief to people in distress," Yushau Shuaib, National Emergency Management Agency (NEMA) spokesperson, said in a communiqué. "We have tried to get relief materials into the creeks for those trapped there, but the military say it [the aid effort] has to wait until the military operation is over."

Military officials say they entered the area to root out militant groups after the groups allegedly attacked government soldiers. The only way the JTF will stop its offensive is if militants produce military personnel they have abducted, Joint Task Force maritime commander, Commodore Azubuike Ajuonu, said in a press statement over the weekend.

The International Committee of the Red Cross (ICRC) is appealing to government Joint Task Force troops to allow humanitarian passage and to recognise civilians' right to access medical care.

Most of the 3,000 people estimated to have fled their homes are still hiding in the bush, NEMA says.

The delta is made up of a dense network of freshwater creeks, much of it accessible only by boat. Without access to the creeks it is difficult to get a clear picture of what is going on, said Michael Uwemedimo, who works with local NGO Stakeholder Democracy Network.

Local authorities and NGOs, including the Nigerian Red Cross and ICRC, are urging the JTF to enable a joint humanitarian assessment team to travel to the creeks as soon as possible.

The JTF launched an offensive on communities across Warri south and southwest government areas on 13 May after JTF troops were reportedly attacked by armed groups in Delta state, according to Amnesty International.

JTF forces have reportedly rescued 20 hostages - some Nigerian, some foreign - from Delta state since the offensive began, according to military statements; an unknown number of government soldiers remain missing.

Movement for the Emancipation of the Niger Delta (MEND), an umbrella group representing a number of militant factions, issued a statement on 25 May saying it has destroyed several major oil pipelines in response.

Civilians "afraid"
ICRC is helping the Nigerian Red Cross and NEMA provide food, water, blankets and utensils to the estimated 400 displaced people who are sheltering in a primary school in Ogbe Ijoh, capital of Warri south government area.

Displaced mother Kate Okrika told IRIN she does not know when she will be able to go home. "We are afraid of troops because they think we are supporting militants. So until the military stops raiding our villages we will be too afraid to return."

She added: "Things have improved a little - we now have mats and some mattresses. We gather twice daily to collect water and food.

Patricia Ogoro, who fled Okerenkoko village, told IRIN she is thankful to be alive. "I am very tired. I thank God for sparing my life.My children are in the bush, four of them. I couldn't take anything, not even clothes. I don't have any money, not even one naira."

Women and children make up 90 percent of the displaced, NGOs say. Witnesses say the men are too frightened to come forward for fear of being harassed or arrested by government soldiers.

Several witnesses said men being treated in the local hospital were harassed and questioned by soldiers. "Even the local council chairman went into hiding during the crisis because he was afraid of being arrested," NEMA's Shuaib told IRIN.