FG To El-Rufai: You're Not The 'Priest' You Claim To Be 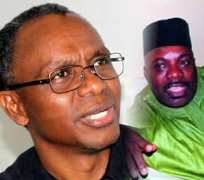 TOTAL
4960 mw
Therefore when the 10 NIPP projects are fully on stream, which will be within the next few months the total national generation capacity will not be less than 9000 mw which will be a 200% increase in the generating capacity as compared with the figures for 2011 and the highest ever by any administration since independence.

Agriculture
• Government has elevated the living standards and income of farmers and rural dwellers through the free distribution of several millions of improved seedlings including cotton,sorghum,rice and cassava.

• Today Nigeria is the world’s largest producer of cassava and is on its way to becoming the largest exporter of cassava products globally.

• The agricultural transformations agenda will double cocoa production from its present 250,000mt to 500,000mt /annum by the year 2015.

• The flour millers, who initially resisted the primary directive from government for 3 % local substitution, have since on their own increased the substitution ratio to 20%. For example Gala a UAC product has a substitution ratio of 20 % cassava mix. This has resulted in considerable foreign exchange savings and increased income for farmers and agro- allied processors.

• On the PPP initiative of the Federal Government, foreign investors have invested $40 million in rice production and milling in Taraba state (Feb 2012). This will be the largest rice farm project in Africa.

• The expected production is 300,000 metric tons of rice (which accounts for 15% of the national rice import) while at the same time creating 15,000 jobs.

• This administration is facilitating the establishment of the largest high quality rice processing mills with an overall installed processing capacity of 2 million tons per annum which will also be the largest installed milling capacity in Africa. It will be private sector driven and established in rice producing states.

• Presently however 3 new rice processing mills in Ebonyi, Niger and Kebbi states with combined 90000 tons of milled rice per annum are already completed

Projects completed:
1. Northern Ishan water supply project in Edo state with a plant capacity of 9 million litters per day to serve communities of Uromi, Ubiaja, Ugengu, Ugboha and Igueben, with a total projected population of 500,000 by 2012 at a cost of n2.5billion

2. 10 million liters per day – Mangu water treatment plant at the cost of over n1billion to serve communities of Gindiri and Mangu townships in Plateau state

Transportation
In the transportation sector government has successfully rehabilitated 3000km out of 3505 km of existing narrow gauge rail lines. The Lagos –Kano corridor will be completed this year, while the Port Harcourt -Maiduguri corridor which has started will be completed in 2013. The all-important Itakpe-Ajaokuta–Warri modern standard gauge line rail lines is nearly complete with the entire tracks 100% laid down. The 2 nd similar standard modern guage lines between Lagos and Ibadan has also been awarded.

Aviation
There is ongoing massive rehabilitation of airports nationwide, and for the first time ever there is 100 % total radar coverage of Nigeria’s airspace .this is the largest radar coverage project in black Africa.

Ports
At the ports, cargo clearing time has been reduced from one month to seven days and is expected to be reduced further to four days within the next few months.This has seriously impacted positively on the business and economic climate within the country.

Infrastructure
In the area of infrastructure this administration’s impact can be felt in all nooks and crannies across the six geopolitical zones of the country as follows:

• Kano-maiduguri dual carriageway will also be completed by this administration

• At then beginning of this administration benin _ore road was almost impassable and it used to take 6-9 hrs to get to lagos .now it takes just 3 three hours.

• Apapa –oshodi expressway is being rehabilitated

• 9th mile to otukpo –iweata road in benue is being rehabilitated

• Gombe –potiskum road washout
• Auchi-ikene expressway washout
• Biliri highway washout
• Sokoto –ilela washout
• Km 30 onitsha –enugu road washout
Conclusion
With these few highlighted developmental efforts and activities of the government enumerated above, all the fallacies, deceits, misinformation and disinformation about incompetence and non-performance of President Goodluck Jonathan’s administration are unfounded not supported by facts on ground and are therefore are outright falsehood.

Irrespective of what the detractors of this administration want the general public to believe, the truth, and indeed the absolute truth, is that this government is alive to its responsibilities, effectively, actively performing and responding to the needs of the Nigerian people.