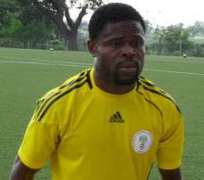 In 2001, the U-17 World Cup in Trinidad & Tobago saw the emergence of a new kid on block of goalkeeping with the name, Bassey Akpan.

He ended the competition with silver medal and big clubs in the Nigerian league came calling.

After playing is trade with several clubs in the Nigerian Premier League, he joined HoÃ ng Anh Gia Lai in Vietnam.

In this interview with Ime Bassey, Akpan shares his thoughts on his carrier and Nigerian football. Excerpt:

Who is Bassey Akpan?
I am a Nigerian goalkeeper from Eket Local Government Area of Akwa Ibom State. I was born on the 6th of January 1984.

It is surprising that you play your football in Vietnam, how did you secure the move and how has it been for you since you moved?

I came to Vietnam through an agent that was introduced to me by Chidi Odiah named Joe Briggs. To God be the glory, since my arrival here in Vietnam I have been the number choice for my club, most outstanding goalkeeper in the league, I had severally won the best player of the month and making the team of the week on several occasions

Can you compare the Vietnam League of the NPL?
Bassey Akpan
V-League is very competitive because lots of pace and strength are required. V-League compared to our league back home is sort of more inspiring, managed and coordinated. Playing at home isn't a certainty u must win your game and the officiating is more coordinated without favour.

If the technical crew of the Super Eagles led Coach Stephen Keshi invites you, will you accept it given the stiff competition from Enyeama and Co?

Definitely, I'll gladly accept it, I had never turned down any invitation from the national team before right from when I was in the U-17 team, the flying Eagles and even the Super Eagles. It is the dream of every patriotic individual to serve his father's land. I don't mind the competitions; so long as I have the prowess to be there, I will make my self available.

Since Keshi took over the Super Eagles there have been some degrees of stability, do you see him achieving success with the team?

I believe Coach Keshi has the know-how in taking the Eagles back to the top with respect with what he achieved as a player and coach. All his tremendous efforts at fortifying the team and boasting the morale of the home players, which is a great step towards achieving the success we all look forward to.

Who is your role model?
My brother (Bassey Abasubong) and Dosu Joseph are my role models. Goalkeeping to me is a gift from the God which I started when I was in primary school days. I really thank God for making it a reality in my life and most importantly, a successful one.

What would say actually made it difficult for you to hold a regular shirt for the Super Eagles?

The keen challenges from the trio of Vincent Enyeama, Dele Aiyenugba and Austin Ejide made it hard for me to secure the number one shirt. Notwithstanding, whenever I'm called to the Eagles camp, I always give my best.

How many Nigerians are in the Vietnam league and do you think it is strong enough for you to be recalled?

Nigerians here are quite many, if I'm not mistaking we should be like 18 plying our trades here. I feel at home with the presence of the likes of Gbenga Ajala, Timothy Ajembe, Olushola  Aganun, Sunday Emmanuel, Ganiyu Oseni, Samson Olaleye, Aniekan Apen, The Ebeji Brother's, Odinaka Ezeocha and Obinna Ajoku just to mention a few. Amaobi Fortune is amongst the highest goal scorers in the league.

The league here is very competitive with respect to its standard but can't be compared to that of Europe.

You played in Nigerian Premier League before leaving for Vietnam, can rate you rate the NPL given the closeness at top of the table with just two matches left?

In all honesty our league has improved substantially than compared to previous season; the officiating, managing and discipline of the teams have really improved in the league. But there are still areas that need urgent improvement; Facilities, players' welfare and commercialization of the league to make it more interesting and attracting.