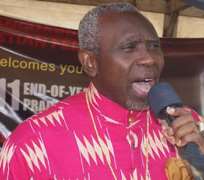 ...Lists The Many Errors In America’s Impression of Terrorism In Nigeria

SAN FRANCISCO, August 09, (THEWILL) - President of the Christian Association of Nigeria, (CAN), Pastor Ayo Oritsejafor has written United States Secretary of State, Hillary Clinton, who was in the country for about five hours on Thursday, expressing concern over inaccuracies in officially sanctioned information in U.S. quarters on terrorism in Nigeria.

In addition to picking holes in the 2011 International Religious Freedom report published by the Department of State, he also identified the misrepresentation of facts concerning the 2011 post-election violence in the North.

“Welcome to Nigeria and thank you for taking the time to visit our beleaguered country at a time when insecurity is at the highest levels it has been in recent memory. Just days before your visit, 17 worshippers were killed in a church service so we do indeed appreciate the effort and courage you displayed in coming.

“Madame Secretary, I had wanted an audience with you to raise my concern over recent statements credited to the US Government, including at a congressional hearing in which I testified last month. These pronouncements from the State Department have distortions, omissions and in some cases clearly misrepresent facts on the ground in a manner that beclouds the crisis facing Nigeria and is ultimately deleterious to the quest for a peaceful and truthful resolution.

“However, as I understand that your schedule is very tight, I will address here the latest such statement contained in your just released 2011 International Religious Freedom report.

“Much to our dismay, the information contained in our memorandum to the presidential panel on Post-Election Violence was not included in the 2011 State Department International Religious Freedom Report. Our memo presented widespread incidents of violence targeting Christians in 12 northern states in April last year during the reporting period of the 2011 report. Unfortunately the destruction of over 700 churches and the systematic massacres of hundreds of Christians in 48 hours – the largest single attack on Christendom in contemporary world history anywhere on the planet - were not included in your report.

“Even more surprising, the report failed to accurately describe the horrific Christmas Day multi-city church attacks. These coordinated attacks on three states, comprising Niger, Plateau and Yobe, claimed over 60 lives and, for a second consecutive year, stunned the world. The report merely mentions the Christmas Day church bombing of St. Theresa’s Catholic Church in Madalla, then fails to communicate the scope and significance of the Christmas Day attacks.

“The pernicious persecution, denigration and dehumanization of Christians in northern Nigeria especially has been a fact of life for over a quarter century. It is therefore disconcerting that the US report addresses it in a speculative tone that undermines the harsh reality of the masses of orphans and widows left behind.

“The report while conceding that the Nigerian constitution forbids adoption of state religion does not plainly point out that the 12 northern states by adopting Sharia codes and creating religious police, ministries of religion and funding mosques are an affront to the constitution’s establishment clause as well as the doctrine of separation of faith and state.

“Finally it is deeply troubling that your report makes an unsubstantiated claim that more Muslims than Christians died in the attacks of last year. This theory was predicated on an erroneous assumption that since the attacks were in “predominantly” Muslim areas, it “follows’ that Muslims would be hardest hit.

“Even if such assumptions could be made without empirical data, the more credible and more plausible proposition is that given Boko Haram’s declared intent to obliterate Christianity in northern Nigeria and its systematic attacks which began almost a decade ago, the majority of the victims are Christians. Since Boko Haram has stated that it does not theologically or operationally target mosques and has so far not succeeded in attacking any, it is only logical that Muslims cannot be the majority victims.

“This is borne out by quantitative data. Out of the 137 religious-motivated violent incidents we tracked, 88.3% were attacks on Christians, 2.9% were attacks on Muslims, attacks on security agents 4.4%, sectarian clashes 2.2% and extra-judicial killings were 2.1%. The US Terrorism report 2011 indicates a total of 136 terrorist attacks in Nigeria. It is inconceivable therefore that Muslims were the primary victims of a jihadist group whose intent is to Islamize Nigeria.

“This year 2012 alone, there have been 49 security incidences of which 80% have targeted Christians.

There are numerous other points that we take issue with but that will have to wait till we have an appropriate forum to fully dialogue on this. However to assist you to be better informed, we are attaching several documents on the conditions of Christians in northern Nigeria:

“1. The Memorandum of the Christian Association of Nigeria to the Presidential Panel of Post-Election Violence of 2011

2. A Compendium of the Marginalization and Persecution of Indigenous Christians and the Church in the Nineteen 19 Northern States of Nigeria conducted in 2010

“In conclusion, we recognize that the State Department reports cannot cover every incident of religiously motivated violence in a country the size of Nigeria. However, the State Department has a statutory duty and moral obligation to give an accurate picture of events on the ground. Although your report indicates that your embassy had “regular” meetings with religious leaders, it is somewhat odd that key data such as what we are now submitting was never asked for.

“We also have no recollection of a visit by the ambassador-at-large for religious freedom in 2011 and also no record of the US embassy celebrating any religious holidays besides the Muslim holidays.

“We urge you to work with us to achieve a truth-based peaceful resolution to the terrorism and extremism that threatens the very life of our nation. We look forward to future collaboration.”