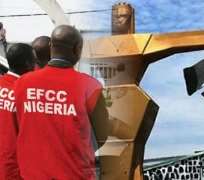 ABUJA, August 08, (THEWILL) - The Economic and Financial Crimes Commission (EFCC) has refuted allegations of ceasing the arraignment of persons and companies suspected to have benefitted from the widely publicised fuel subsidy scam.

The agency also denied being under any form of pressure to either charge the suspects or suspend their arraignments.

“The attention of the Economic and Financial Crimes Commission (EFCC) has been drawn to a report, which appeared in Thisday Newspaper of Tuesday, August 7th, 2012 with the banner, Subsidy: EFCC Suspends Arraignment of Marketers” EFCC wrote in a statement signed by Wilson Uwujaren, its acting head, media and publicity division.

“The report suggests that the Commission has, following political pressure, suspended further arraignment of oil marketing companies and their directors suspected to have been involved in the fuel subsidy scam.

“The Commission views the suggestion as a distasteful misrepresentation of the reality on ground. The true position is that there is no untoward pressure on the EFCC to charge or suspend the charging of any suspect to court.”

The statement explained that the Commission had not taken any accused person to court these past few days because courts were all gone on break, the arraignment of the suspects could only hold at open courts.

“It must be restated, however, that before the first batch of suspects were charged two weeks ago, the Commission had announced that the arraignment of suspects involved in the subsidy fraud shall be at intervals,” the statement continued, adding that the format was chosen, given the number of organisations and individuals involved in the ongoing investigation.