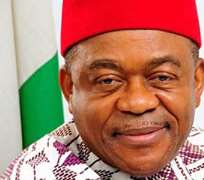 UMUAHIA, July 30, (THEWILL) - The Abia State government has ordered the immediate closure of all revenue accounts in ministries in the state. Instead, it directed that all revenue due to the government should go into the consolidated account of government.

Governor of the state, Theodore Orji handed down the order in a meeting with commissioners, permanent secretaries and heads of non-ministerial departments of revenue generating ministries of the government, at the Government House, Umuahia.

He observed, with dismay, that some ministries were still using revenue agents other than the only revenue consultant approved by the government, warning that any commissioner or head of non-ministerial department found to be engaged in the act would be arrested and sacked.

He expressed regrets that money meant for government is diverted to private pockets while the government labours to meet its financial obligations to the people.

The governor also directed the Abia State Environmental protection Agency (ASEPA) to immediately cancel all contracts it has with revenue agents while directing the Board of Internal Revenue to henceforth desist from collecting revenue of the board upfront.