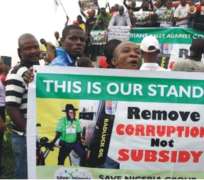 Subsidy Thieves Will Go Scot Free
The recent clamor for subsidy thieves to be prosecuted is as illusionary as hoping that Lucifer will betray the Queen of the Coast. I have reiterated in an earlier piece, 'Shut Up! Nigerian Government Cannot Prosecute Subsidy Thieves' that those who hoped that subsidy thieves will be prosecuted will be disappointed at the crash of their optimism. Recent events have shown that successfully prosecuting those who stole N1.7 trillion naira that belongs to the Nigerian people under a fraudulent subsidy regime as revealed by the Farouk Lawan led Subsidy Probe Committee of the House of Representative reports and the recent Aigboje Aig-Imoukhede Presidential Review Committee is a mirage and can never happen.

The CBN was first contracted to rubbish the report, later the NNPC joined fray. Their attempts to discredit the subsidy probe report failed to impress both the Nigerian people and the Nigerian media. They changed tactics; the Attorney General of the Federation came with his own version of the understanding of the report and was short of calling it an ill prepared document which needs proper reconstruction. Nigerians ignored him and continued with calls for the prosecution of oil thieves. The Lawan $3 million dollars bribery scandal came and Nigerians refused to be distracted from the substance of the matter. Now the government has directed the EFCC to investigate the reports and prosecute offenders. That is where the matter will finally die due to imbecile prosecution.

The EFCC have buried different cases of corruption due to inconclusive investigations or haphazard prosecutions. In some cases there is deliberate collusion between the EFCC, the suspects and the Judiciary to encumber the cases so that nothing will come out of it. What happened in the Erastus Akingbola case where the Judge dismissed the suit for incompetent prosecution is a case at hand.

The only achievement of the subsidy probe is information. This information will be vindictively handy in the day of revolution or reckoning when the Nigerian people will reclaim their commonwealth from the hands of thieving leadership. The second gain is that the thieves will reduce their tempo and this reduced tempo will save the nation billions of dollars of hitherto stolen funds.

The expectation that Goodluck Jonathan will prosecute the fingers that fed his presidential election is wishful thinking. During Obasanjo era, the former president refused to surrender Babangida for prosecution. The Dr Pius Okigbo Committee report on the squandering of $12 billion dollar gulf oil windfall disappeared from all public records during the tenure of Olusegun Obasanjo. All attempts by the Nigerian people to pressurize Obasanjo to prosecute the Babangida fell on deaf ears because the later was the leader of the people who dragged Obasanjo into the State House in 1999.

Umaru Yaradua was not able to surrender James Ibori for trial. He frustrated all earlier attempts by the Metropolitan Police to arraign James Ibori for money laundering charges. He sent a high powered letter and delegation from Aoondoaka, then Attorney General and Minister for Justice of Nigeria to convince the British police that Ibori was a clean man. Ibori had used Delta State funds to bankroll his presidency with the permutations that Goodluck Jonathan will be dropped as Vice President after Yaradua's first tenure.

There is yet no record in Nigeria where a political godson led the arraignment of the godfather for corruption related matters. Godsons and godfathers quarrel in Nigeria over control of state resources but their disagreement has never degenerated to the extent of the godson and incumbent dragging his benefactor to the courts for fraud related matters. It is a no go area for Nigerian politicians. Goodluck Jonathan cannot be an exception. He cannot be different from the tradition that trumped him up.

Goodluck Jonathan would still have won the 2011 presidential elections without the assistance of the huge funds deployed at the time. The hawks convinced him that without a huge financial chest, his presidential dream is finished, and such reasoning commenced the process of the looting of national treasury unprecedented in the history of Nigeria. Therefore, the people who used different guise to mobilize those funds cannot be victimized through fraud related prosecutions. Funds were mobilized from Fuel Subsidy bills, Pensions, Capital Market, Customs, Federal Inland Revenue, Ministries, Departments and Parastatals of Government. The fronts refused to surrender the privilege even after the elections had been concluded. The presidency preferred to confront the masses by removal of fuel subsidy than face the blood sucking oil mafia.

The earlier this government runs affairs by telling the truth, the better for all. The opposition Action Congress of Nigeria had earlier called on President Jonathan to apologize to Nigerians over the subsidy scandal. This is the best he can do under the circumstances. Let him apologize to Nigerians for allowing his party men and their friend's costly indulgence in endless sharing of subsidy national cake and promise to block all loopholes whereby such thievery will occur in the future. Nigerians will likely appreciate an admittance of wrongdoing and a verifiable evidence of preventing future occurrence than the current circus show.

The politics of N1.7 trillion naira subsidy thefts is a time bomb which will likely explode on the thieving politicians and their business associates in the not too distant future. Equally, the possibility of Goodluck Jonathan betraying his helpers is rare and such optimism is an expensive mental exercise. This cartel is so oiled and powerful that crumbling the Jonathan administration will take them a few weeks and for a president already frightened by Boko Haram Jihadists, he cannot afford another battle with the oil thieves.