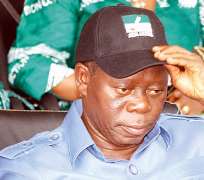 On Thursday, July 12, 2012, which was the last day for campaigns and publication of political advertisements by parties, the Edo State Chapter of the Peoples Democratic Party (PDP) published an advertorial in some national newspapers signed by the State Publicity Secretary, Mr. Matthew Uroghide, wherein it alleged that Governor Adams Oshiomhole and governorship candidate of the Action Congress of Nigeria (ACN) was not qualified to contest in the July 14, 2012 election.

There was no better way of serving the notice that it (PDP) would fall back on and pursue that line of action, along with other options, in court in its bid to win the Edo governorship seat, in case Oshiomhole deployed all his stratagems, as he had done, to emerge winner of the election. The party’s leadership guard, must have reasoned that, after all, Oshiomhole had, in the first instance, won the governorship seat through the verdict of the Court of Appeal on November 12, 2008.

The idea of seeking to kick Oshiomhole out through the court now resonates well in the camp of the PDP, after the effort to do so through the ballot box suffered a setback. It is, indeed, not difficult to predict that the party would be working on a two-pronged approach to expose Oshiomhole’s perceived underbelly and cause a collateral damage to his position: the first is to collate provable cases of irregularities allegedly perpetrated by the ACN during the election and approach the Election Petition Tribunal with them; this is one of the last cards. The second is, perhaps, to challenge his qualification to run for the election.

The second approach is particularly of interest to me. I am sure it is already exciting the PDP camp to no ends. The allegation that the comrade governor does not possess the requisite education qualification, as constitutionally circumscribed, to contest for the governorship position should excite the Nigerian people for understandable reasons: Oshiomhole led the Nigeria Labour Congress (NLC) as its president for eight years, having honed his unionist skills and tricks from the Textile and Garment Workers Union (little wonder he is sardonically referred to by his traducers as a tailor). While in the NLC leadership saddle, he engaged the powers-that-be with great speech. He deployed the power of logic in his arguments against perceived anti-people policies of the Federal Government.

He had acquitted himself well and has continued to acquit himself as a drum-major of any ideology he is sold to. Upon close scrutiny and analyses, his grammar and diction may not be perfect; yet his ideas can rarely be faulted. However, the claim by the opposition is that Governor Oshiomhole does not possess the minimum secondary school certificate that should have qualified him to participate in the election. The opposition claims that by his own admittance and /or disclosure in the form he filled and submitted to the Independent National Electoral Commission (INEC), he only possesses a Modern Three Certificate which it (opposition) seems ready to prove in court as not being equivalent to secondary school certificate.

I have been trying to imagine the extent to which the PDP may want to go to ensure that Oshiomhole does not wriggle out of this seeming constitutional quagmire. In fact, the opposition camp, according to feelers, claim that Oshiomhole filled Modern School and National Institute of Policy and Strategic Studies (NIPPS) in the INEC form. If the claim is correct, then the nation may, in the next few weeks, be forced to witness some legal gymnastics as both parties will engage each other in the court over the issue. In a response to the claim that he does not possess secondary school certificate, Oshiomhole had said he would meet the PDP candidate, General Charles Airhiavbere (retd), in court.

According to Oshiomhole, “I read today (Monday, July 23, 2012) that some lawyers have volunteered to render legal service to my opponent in the election. They said I possess only Standard Three. Well will know when we get to court.” (See The Nation, Tuesday, July 24, 2012, page 59). The governor was right about meeting his opponent in court. That is the only place to seek equity and redress. It is not a place for grandstanding nor is it a platform for razzmatazz. No amount of shenanigans will render the court and their lordships gullible. They can never ever be bamboozled by sweet talks. They can only be guided by verifiable facts and will eventually rule only on points of law, especially where the issues are as clear and straightforward as interpretation of statute, for instance.

But before the legal battle begins, I must confess that I am somewhat curious about Oshiomhole’s disposition to the issue of his education background. He seems to be uncomfortable or ashamed of his education background otherwise he would have gleefully talked about it instead of just declaring that they would meet in court. This attitude was first demonstrated during the final round of the Edo governorship election debate on July 5, 2012 organized by the Nigeria Election Debates Group (NEDG) where the panel of interviewers asked the candidates to make their opening speeches by dwelling on their background and how that was capable of building people’s trust in their leadership. Airhiavbere of the PDP and Solomon Edebiri of the All Nigeria Peoples Party (ANPP) spoke extensively about their education and career backgrounds but Oshiomhole, in his response, did not talk about his education background. He only began his narrative from age 17 when he claimed his participation in unionism started.

That was how he cleverly sidestepped the issue of his education background. I noticed that and I smiled. I remember that two friends called me while the debate was in progress on AIT to say that the governor did not talk about his education background. That had fuelled the suspicion that something was amiss with his credentials; and it has continued to reinforce the claim by the opposition that what he filled in his INEC form was Modern Three Certificate and NIPPS.

I just hope that the opposition challenge will not go beyond the adequacy of the qualification to the authenticity of the certificate itself: whether or not the Modern Three Certificate was even forged. These are issues that will crystallize in a matter of time. Whatever the outcome of the legal battle is, one thing is very clear: Oshiomhole has done well in educating himself and learning on the job as evident from the ways he has so far applied himself to the rigours of his various callings, but he would now be forced in court to relate with his real education background which he had found inconvenient to relate with during the gutsy electioneering and the very engaging debate that presaged the Edo governorship election.

The stage is being set for another grudge fight-where the opposition will be playing its last cards or pulling its last devastating punches against the hard-fighting Oshiomhole. How will it neutralize or mitigate these? Will he survive the onslaught? If he survives, what lessons would have been learnt by Nigerians and if does not survive, what will be the implication for the Edo politics and political economy? So many questions! So many possible propositions! But only time will tell what the end will be.