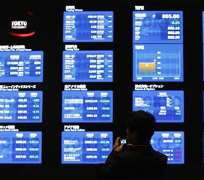 European shares fell and the euro hovered near multi-year lows on Monday after two Spanish regions said they would need aid, reigniting fears the country will become the fourth euro zone member to need a full international bailout.

Ten-year Spanish government bond yields rose to a fresh euro-era high of 7.55 percent after a second region said over the weekend it would ask for central government help to keep it afloat.

This prompted a broad-based move away from riskier assets and yields on 10-year U.S. Treasuries touch a record low of 1.4246 percent in Asia. Japanese government bond yields hit their lowest since 2003 while German bond prices rose.

The single currency was being hit hard and fell below $1.2100 for the first time in more than two years to around $1.2095. The euro slid 1 percent against the yen to the lowest level in nearly 12 years.

The FTSE Eurofirst 300 index .FTEU3 of top European shares opened down 0.8 percent at,040.87 points, led by weaker bank stocks and after losing 1.5 percent on Friday.

Spain's fiscal woes also triggered selling in oil, sending Brent down more than $1 at $105.43 a barrel, while corn and soybean prices eased from the record highs reached at the end of last week.