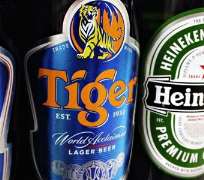 The tussle for Southeast Asia's biggest beer maker comes amid a wave of industry consolidation and expanding beer sales in emerging markets, although APB's ownership structure makes this among the most complicated assets to buy.

Heineken's proposal on Friday completed a frenetic week for F&N, whose joint venture with the Dutch brewer has a 65 percent controlling stake in APB.

Heineken offered to buy out F&N's interest in APB after Singapore's Oversea-Chinese Banking Corp (OCBC.SI) and an affiliated group said they had received a $3 billion bid for their stakes in F&N and APB from companies linked to Thai billionaire and founder of Thai Beverage PCL (TBEV.SI), Charoen Sirivadhanabhakdi.

APB, whose shares surged as much as 18 percent to a record on Monday, was still trading below Heineken's offer of S$50 a share because of uncertainty over whether the deal would go through.

F&N, whose shares rose about 5 percent, said its board was considering Heineken's offer.

F&N was not immediately available to comment on Goldman's (GS.N) role as its financial advisor, while a spokeswoman for the bank declined to comment.

"There's still some uncertainty as it is not clear how F&N will react to the offer," said Goh Han Peng, an analyst at DMG & Partners Securities.

"If the F&N shareholders do not accept the offer from Heineken, they may come up with a hostile offer for APB, meaning they will go to the minority shareholders. The second way is to go directly to F&N and mount a takeover because shares in APB are very illiquid."

Nomura raised its target price on F&N to S$9.16 from S$8.08 and maintained its neutral rating. Nomura said if F&N accepts Heineken's offer, it will reap cash proceeds of about S$5.2 billion but lose an important contributor to its earnings.

Without APB, F&N will have a smaller food and beverage business comprising its ASEAN soft drinks and dairies businesses, Nomura said. But the Singapore conglomerate, which also owns a property division, will have additional cash of S$5.2 billion, or S$3.66 per share, part of which could be paid as a special dividend, according to Nomura.

Kirin, which holds 14.7 percent of F&N, is also weighing its options, sources familiar with the matter said, declining to be identified because of the sensitivity of the matter.

"Without APB, Kirin and ThaiBev may push for a demerger of the property business so the businesses can be valued separately and control for the F&B and property assets settled accordingly," Nomura said. ($1 = 1.2569 Singapore dollars)