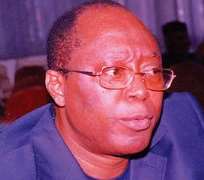 I am not surprised that former Governor of Edo State on the platform of the Peoples Democratic Party (PDP) for eighteen months, Professor Oserhiemen Aigberaodion Osunbor, has not been able to demonstrate to the world that he has the capacity to rise above political parsimoniousness.

The truth is that he cannot do it (I will prove that shortly) and this is the tragedy of the man whose tenure was suddenly terminated by the Court of Appeal on November 12, 2008 to pave the way for the takeover of the reins of governance by Adams Aliu Oshiomhole of the Action Congress of Nigeria (ACN).

Rather than show gratitude to the political structure that brought him out from the academia and made him what he has become in the ecology of politics in Edo State by doing all within his powers to sustain the structure, Osunbor has consistently played the game of treachery to undermine it.

In a piece I wrote before the July 14 governorship election in Edo State entitled: “Edo governorship and Osunbor’s danse macabre,” I had adverted people’s attention to the fact that Osunbor was deeply engrossed in a political macabre dance by pandering to the attraction of filthy lucre and narcissism.

I had posed the critical question as to who would save Osunbor from himself and that was because he had gone too far in the pastime of vindictiveness and the blame game which he now charges some PDP leaders with after playing emu in the grand conspiratorial alliance with Oshiomhole, in the governorship poll, that largely did the PDP in.

In a publication in some national newspapers (see Vanguard, Thursday, July 19, 2012, page 11), Osunbor had reportedly said “Edo guber election result didn’t surprise me.” He had tenuously claimed that the PDP lost the governorship election on February 25 when the party leaders allegedly manipulated the primaries that produced the candidate of the party: Charles Airhiavbere.

He had even tried to attribute to himself some self-importance when he said, “those whose mission at the primaries was to disgrace Osunbor have themselves been disgraced without any exception.

They made a costly mistake and should take responsibility for PDP’s woeful performance…. So long as the party remains in the hands of vindictive, unforgiving and self-centred leaders, who endlessly engage in self glorification yet could not win their wards, PDP seems doomed in Edo State.”

I disagree with his implicit proposition that his candidature would have swung victory for the PDP in the governorship election. For someone who came last (fifth position) in the primaries of the party, how else did he want to be told that he had been rejected by the structure that threw him up. His rejection by elements within his party was an indication of the greater rejection he would have suffered in the hands of the Edo electorate for understandable reasons.

His claims were thus unfounded; otherwise, if he knew he was popular and could win on his own merit and/or performance in office, why did he not seize the platform of another party to pursue his governorship ambition? But he would remain in the PDP to work against it from within. This was a patently callous and ungodly act by someone who is the greatest beneficiary of the party in Edo State.

Those who are very familiar with the politics of Edo State PDP and the emergence of Osunbor as the party’s governorship candidate know that he was gratuitously handed the party’s governorship ticket in 2007 because former President Olusegun Obasanjo, who was then in the saddle, insisted he should be given the ticket. Otherwise, Odion Ugbesia (now a senator) would have emerged as the party’s candidate; and, even if Ugbesia were not to be in the race, Professor Julius Ihonvbere looked good to trounce Osunbor as he did in the February 25, 2012 primaries (Ihonvbere came fourth).

After he emerged as candidate in 2007, other aspirants campaigned for him. Ihonvbere played a leading role in his campaign, tending to the reputation of his campaigns in the media. Osunbor has greatly benefitted from the large-heartedness of the party and its leadership that launched him into political limelight by sponsoring him to the Senate in 1999 and 2003 as well as the governorship outing in 2007. I had expected that he should have been very grateful to the party and its leaders rather than bashing them. This goes to show how greedy he is for power. Is he the only person in the party?

But I have always maintained that his decision to abandon the party by supporting Oshiomhole was foolish and morally indefensible. It shows how puerile he is politically. It is on record that his attitude in office as governor was not even salutary to the wellbeing and unity of the party in the State. Rather than build harmony, Osunbor’s desperate attempt to build a new structure in the party which would bolster his re-election, precipitated turmoil. He had used the instrumentality of his position as governor to destabilize the party. He was so committed to the process of wresting the control of the party from the leaders so that he would become the de-facto leader of the party.

The PDP and even Osunbor himself have not fully recovered from the outcome of that disastrous enterprise. Having squandered the opportunity of acting as a binding force for the PDP by allowing unbridled aspiration for a second term in office and desperation to control the party machinery to consume him, I had submitted that my expectations were that Osunbor should have maintained a low profile to allow the passage of time to heal the wounds he had inflicted on himself and the party instead of rushing out in a bid to contest the governorship on the party platform.

He was no doubt deluded into believing that he was popular and that his little achievements (de-silting of drainages and renovation of some roads) in office would speak for him. But Oshiomhole for whom he had worked against his own party (PDP) had said consequent upon taking over from him (Osunbor) in 2008 that he did not leave behind any legacy.

And it is quite sad that Osunbor, a Professor of Law and two-term leader of the PDP, would, perhaps, without the slightest prick of conscience, dump a party that has made him all that he is today in the political sphere. It is even sadder how Osunbor attempted to rationalize the tragedy of his abandoning the PDP and its candidate. Read him: “Oshiomhole has promised to finish the projects I started while in office, including the ones in this community. He has promised to sink more boreholes, and complete the construction of the road I started in Iruekpen. Oshiomhole is a nice person. Outside politics, we are friends. He has even bought me a jeep just like the one he used as his official car. The governor has never said anything against my person….” (THISDAY, Wednesday, May 30, 2013, page 12).

I wondered if that was the bait that the comrade governor used to “destroy” him (Osunbor) completely politically. What was a jeep to Osunbor? What was he doing with the jeeps he had before? This sadly shows, perhaps, how unreasonable and isolated Osunbor has become in the environment of PDP politics.

As I wrote before, I had expected Osunbor to engage in a conversation with himself (monologue), with the party (dialogue) and seek to retrace where the rains began to fall on him with a view to working towards reconciliation with the elements that he wronged when he was in the saddle. This attitude would have projected him as a great politician with his eyes on posterity. But unfortunately, he has allowed egocentricity to shear him of political reasonableness. This is indeed sad! With this obvious anti-PDP disposition, Osunbor has simply made it clear that he is no longer in the PDP and the party should take note.