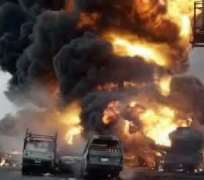 PORT HARCOURT, July 20, (THEWILL) – Casualty statistic (according to witnesses) is reported to be around 30 in an oil vessel explosion that occurred on Friday at Abuloma waterfront in Trans Amadi, Port Harcourt.

Residents of the area said the vessel had berthed for welders to mend a leakage noticed on the vessel’s fuel tank when the explosion occurred. All the people aboard, numbering about 30, were feared to have died.

Confirming the tragedy, sector commander of the Rivers State arm of the Federal Road Safety Commission (FRSC), Dr. Kayode Olagunju said the fire from the explosion was confined to the water area.

“An oil vessel around 9:45am caught fire and exploded at the Abuloma Waterfront in Port Harcourt. Fire still restricted to water area,” he said just after the incident. “FRSC, NEMA, Police, Fire Service and other rescue agencies on the ground. Casualty figure [is] not known yet.”

Also, south-south zonal coordinator of the National Emergency Management Agency (NEMA), Mr. Umesi Emenike corroborated Olagunju’s statement that the cause of the explosion was still unknown.

“We have not been able to ascertain how many persons involved in the explosion. NEMA and other relevant agencies are still on rescue work after which we will make public how many persons that may have died,” he said.

“The tankers are still burning and no casualty has been confirmed. The cause of the fire is still unknown and we are at the scene monitoring the situation of things to ensure the safety of lives and property.”

Emenike said fire fighters were still working to quell the flames, also confirming that five other petroleum tankers caught fire at Eneka in Obio/Akpor Local Government Area in another incident.