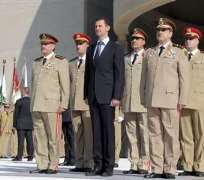 Syria's defense minister and President Bashar al-Assad's brother-in-law were killed in a Damascus suicide bomb attack carried out by a bodyguard on Wednesday, the most serious blow to Assad's high command in the country's 16-month-old rebellion.

The bomber, said by a security source to be a bodyguard assigned to Assad's inner circle, struck a meeting attended by ministers and senior security officials as battles raged within sight of the presidential palace.

State television said Defence Minister Daoud Rajha and Assad's brother-in-law Assef Shawkat, the deputy defence minister, had been killed in a "terrorist bombing" and pledged to wipe out "criminal gangs".

The men form the core of a military crisis unit led by Assad to take charge of crushing the revolt and the authorities immediately appointed a new defence minister, Fahad Jassim al-Freij, previously the armed forces' chief of staff, to avoid appearing paralyzed by the attack.

Assad has not appeared in public since the attack or made any statement, but sources with knowledge of the situation said he was not at the meeting where it took place.

The explosion appeared to be part of a coordinated assault on the fourth day of fighting in the capital which rebel fighters have called the "liberation of Damascus".

Five explosions were heard later on Wednesday close to the base of the elite 4th armored division, led by Assad's brother Maher, residents said. The division has been instrumental in confronting dissent, quelling protests in Deraa, Homs and Idlib.

Rebels say they have brought reinforcements from outside the city to end four decades of rule by the Assad family by attacking the power base of the ruling elite for the first time.

Republican Guard troops sealed off the Shami hospital near the site of the explosion at the security meeting, activists said. An army statement issued after the blast said Syria was "more determined than ever to confront all forms of terrorism and chop off any hand that harms national security".

An army barracks near the "palace of the people", a huge Soviet-style complex overlooking the city from the western district of Dummar, came under rebel fire around 7.30 a.m. (0030 EDT), activists and a resident said.

"I could hear the sound of small arms fire, and explosions are getting louder and louder from the direction of the barracks," Yasmine, an architect, said by telephone from Dummar.

Dummar is a secure area containing many auxiliary installations for the presidential palace and the barracks is just hundreds of meters from the palace itself.

"This is the volcano we talked about, we have just started," said Qassim Saadedine, a spokesman for the Free Syrian Army, a group of army defectors and Sunni youths.

Liwa al-Islam, an Islamist rebel group whose name means "The Brigade of Islam", said it had carried out the attack after weeks of planning and gave a different version of events.

"Our men managed to plant improvised explosives in the building for the meeting. We had been planning this for over a month," a spokesman for the group, who asked to be identified as Abu Ammar, said by telephone.

State television said earlier that it was a suicide bombing.

"The terrorist explosion which targeted the national security building in Damascus occurred during a meeting of ministers and a number of heads of (security) agencies," it said.

Assad and the ruling elite belong to the minority Alawite sect, an offshoot of Shi'ite Islam that has held power in Syria since a 1963 coup.

It has endured more than a year of rebellion but recent high level defections signaled support beginning to fall away.

Two Syrian brigadier-generals were among 600 Syrians who fled from Syria to Turkey overnight, a Turkish official said on Wednesday, bringing the number of Syrian generals sheltering in Turkey to 20, including a retired general.

Rebels directed their fire overnight at a large state facility turned headquarters for pro-Assad militia, known as shabbiha, drawn mainly from Alawite enclaves in nearby hills.

Army tanks and anti-aircraft guns, used as an infantry weapon, took positions in the northern neighborhood of Barzeh, where hundreds of families from the neighboring district of Qaboun are seeking shelter.

"Anti-aircraft guns are firing at Qaboun from Barzeh. There are lots of families in the streets with no place to stay. They came from Qaboun and from the outskirts of Barzeh," said Bassem, one of the activists, speaking by telephone from Barzeh.

In the central neighborhood of Midan tanks and infantry fighting vehicles known as BDMs took positions in main thoroughfares and sporadic fighting was reported.

"Armor have not been able to enter the alleyways and old streets of Midan. The neighborhoods of old Zahra and the old area near Majed mosque are in the hands of the rebels," said Abu Mazen, an activist in the district.

Rebel fighters have called the intensified guerrilla attacks in recent days, which have targeted shabbiha buses, unmarked intelligence patrols and armored vehicles in the capital, the battle "for the liberation of Damascus".

"It is going to be difficult to sustain supply lines and the rebels may have to make a tactical withdrawal at one point, like they did in other cities," veteran opposition activist Fawaz Tello said from Istanbul.

"But what is clear is that Damascus has joined the revolt," Tello, a Damascene, told Reuters. "By hitting well known Sunni districts of the city, such as Midan, the regime is exposing the sectarian nature of the crackdown."

The United Nations Security Council was scheduled to vote later on Wednesday in New York on a Western-backed resolution that threatens Assad's government with sanctions unless he stops using heavy weapons in towns and cities. Russia has declared it will block the move.