WHY IS OSHIOMHOLE STRESSING THE OBA BENIN? 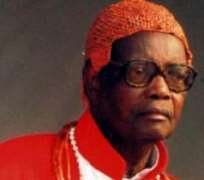 In the last eight weeks or so, certain political actions and indiscretion of Governor of Edo State, Comrade Adams Oshiomhole, have unjustifiably put pressure on the Benin Palace and, by implication, the Omo N’Oba N’Edo Uku Akpolokpolo, Oba Erediauwa, such that the Palace was forced to offer clarifications through press statements on two occasions.

The first occasion was when Oshiomhole went to town with “a billboard campaign” that he had been endorsed by the Benin monarch for re-election and second term in office. Deploying state funds to bolster his re-election bid, the governor was conveniently mounting billboards across the state capital, using the photograph and effigy of the revered monarch and the palace for political campaign.

Oshiomhole ought to have known that the Benin monarch should be insulated from politics, especially the kind that he (Oshiomhole) is now playing in Edo, in order to win re-election. Indeed, he wants to win the July 14 governorship elections at all costs. Therefore, he has chosen to scorn political discretion by sucking the Oba into his re-election politics and politicking.

Understandably shocked by the desperate and indecorous strategy of the comrade governor, which was capable of compromising the Palace and portraying the respected Benin monarch as biased, they had quickly taken steps to stop the “madness”. In a May 4, 2012 press release, the Benin Traditional Council was able to denounce the campaign by Oshiomhole that the Palace had endorsed him for re-election.

The release signed by the Secretary of the Council, Frank Irabor, said: “The Benin Traditional Council wishes to stress that it is unacceptable for the political inclinations of any group of persons to be ascribed to the Oba of Benin.” The Council said the monarch is father to all and restated the non-partisan position of the Palace.

That was quite instructive. But the clarifications would not have been necessary had Oshiomhole not overreached himself to “desecrate” the palace by playing politics with it and the normal prayers of the monarch which he freely gives to anyone who visits him for the purpose of royal blessing.

I must state here that it is to the credit of our revered Benin monarch that he was able to denounce Oshiomhole’s political shenanigans even though the governor and his publicists have been carrying on using other not-too-pronounced strategies to lay claim to the Oba’s prayers (interpreted and presented to the world as an endorsement).

But for an anxious politician as typified by Oshiomhole, there are no limits to desperation and propaganda. Otherwise, he and his publicists would not have taken the Oba of Benin through another stress of trying to clarify the mischievous report in some national dailies that the royal father shunned President Goodluck Jonathan and leaders of the Peoples Democratic Party (PDP) who were in the Palace on June 30, this year, for a courtesy visit.

It is no longer news that the Oba could not come out into the open office where he normally receives visitors to receive the PDP delegation led by President Jonathan. It is a matter of public fact and record that the Oba received Jonathan in his inner sanctum while the normal reception and prayers were conducted in the office for the delegation by the Iyase of Benin.

But, as a mark of frustration occasioned by Oshiomhole’s daily loss of ground and political support in Edo South Senatorial District (Benin Kingdom), his media team (in fact, his Chief Press Secretary, Peter Okhiria) decided to concoct the lie in a press release which he syndicated to the media. Perhaps for pecuniary reason, some sections of the media lent themselves to the propagation of the wicked falsehood and propagated all manner of reasons why the Oba shunned the PDP delegation.

The Palace was again put under needless pressure. The mischievous propaganda of Oshiomhole and his publicists did no honour to the Oba of Benin. Instead of allowing the Oba to have his rest after the president’s visit, the propagated falsehood forced him to authorize the issuance of yet another press release, which was dated July 2, 2012.

Signed by Irabor, Secretary to the Benin Traditional Council, the release said: “The attention of the palace has been drawn to certain mischievous publications in some National Newspapers on the recent visit to the palace by His Excellency, Dr. Goodluck Jonathan, President and Commander-in-Chief of the Federal Republic of Nigeria.

“The palace would like to make it clear that the Omo N’Oba did not shun Mr. President and the Peoples Democratic Party members that came with him. In fact, it is the respect and love Omo N’Oba has for Mr. President, that made Omo N’Oba to still manage to see our President in a private Chamber in the Palace despite a complicated situation that day.

“The public is reminded that, three weeks ago, the Omo N’Oba waited for over two hours in his open office, where he received the Vice President, Architect Namadi Sambo and the PDP chieftains that were in Benin for their political rally….” Nothing could have been more plausible. It is good that the Palace has seen the syndicated report by the Oshiomhole’s publicists for what it was: mischievous; and a section of the media fed the public with the salad of lies. What a shame!

But the Palace and the Oba of Benin must have now known how desperate the comrade governor is. If his life depends on the governorship, is that why he should be stressing our respected and ageing royal father? Oshiomhole and his publicists should be called to order now before they cause further damage to the Benin Palace.