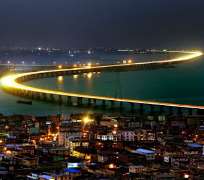 The Lagos Sector Commander of Federal Road Safety Corps (FRSC), Charles Akpabio has announced for the Federal government that the proposed repair work earlier announced to be carried out on Third Mainland bridge has been postponed indefinitely.

"I'm pleased to announce to you that, the Federal Government has indefinitely suspended the proposed repair work earlier scheduled to begin on the Third Mainland Bridge today. The postponement of the repairs is intended to put more measures in place to ease possible traffic congestion the closure of bridge will create but with the recent development the repairs may not commence again today." He said.

The FRSC boss also explained that traffic information would be communicated from time to time via Radio, Television, Newspapers and social media network.

I'd Get Married Again In December-Pastor Kris Okotie

ZIK AND AWO, HEROES THAT FAIL US

A Message To All 'Upcoming' Artists