Bill On Birth Control On The Way, Says Jonathan 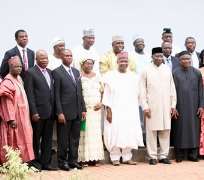 ABUJA, June 26, (THEWILL) – There are indications that the presidency is weighing up the sponsorship of a bill on birth control as a way of curtailing unrestrained population explosion in the country.

President Goodluck Jonathan gave the hint on Tuesday at the Presidential Villa while administering oath of office to the newly appointed chairman and members of the National Population Commission (NPC).

The new chairman of the Commission is erstwhile managing director of Nigeria Brewery PLC, Chief Festus Odumegwu; and he will be joined by 23 members, one of whom was absent and therefore did not take the Oath of Office and Allegiance.

President Jonathan said that although population regulation is very sensitive, government could not rest on its oars and watch it get out of hand.

“For us to plan properly, we must manage our population, but it is extremely sensitive because we are extremely religious people, either as Christians or Muslims,” he said.

“Both Christians and Moslems and even traditionalists and all the other religions believe that children are God’s gifts to man, so it is difficult for you to tell any Nigerian to number their children because they are gifts of God and it is not expected to reject God’s gifts.”

But he said the country must begin to deliberate on the best means of moderating the population.

“The key thing is how you will, through your advocacy, come up with plans and programmes that encourage Nigerians to have the number of children they can manage, before government comes up with clear policies and guidelines. First and foremost is the personal consciousness that people should get the family they can manage.

“Sometimes you get to the house of somebody living in a well-furnished duplex. There is the husband and wife and maybe two, three or four children. But the guard at the gate may have nine children. That is the scenario you have.”

This scenario, he explained, reflects that a certain segment of the population recognises the importance of having a manageable family size while a second segment does not. “If you are used to military barracks, you see that the generals, major-generals, brigadier-generals and colonels have two to five children while those who have no rank have eight to twelve.”

He put the difference between the two segments down to education, saying highly educated Nigerians appreciate the essence of population control while those with a lower level of exposure and education are still unaware of its importance.

“So, first and foremost, before government comes up with regulations, guidelines or laws, Nigerians must be made to know that we cannot continue to procreate and procreate even though we know children are God's gifts,” he added.

Jonathan equally urged the Commission to immediately commence work on the 2016 National Census because of its importance to national growth.

“There cannot be genuine sustained development if it is not anchored on accurate and reliable data,” he noted. “No meaningful planning is possible without dependable data and statistics. This informs why we have chosen these distinguished men and women to run the affairs of NPC.”

Below is the full statement of Jonathan’s speech at the swearing-in:

The critical place of the NPC in the realization of our Administration’s holistic Transformation Agenda can be properly appreciated when we consider the established fact that there cannot be genuine, sustained development if it is not anchored on accurate and reliable data. No meaningful planning is possible without dependable data and statistics.

This informs why we have chosen these distinguished men and women of noteworthy antecedents to run the affairs of the National Population Commission as Chairman and Members.

Distinguished Ladies and Gentlemen, while congratulating you on your appointments, I would like to reiterate the fact that you have been selected to serve on this august Commission on account of your proven integrity, unwavering patriotism, and uncommon sense of duty. It is my hope, therefore, that you will bring these worthy attributes to bear on the discharge of this very vital national assignment.

You are expected to demonstrate the highest standards in the discharge of your constitutional mandate. This entails conducting periodic censuses and the dissemination of accurate demographic data about the country.

As you are aware, the last census which took place in 2006 was conducted using cutting-edge technology, including satellite imagery and electronic data reading technology. The entire members of the previous Commission which conducted the 2006 national census deserve our commendation.

The Commission being inaugurated today is expected to carry on from the lofty heights where their predecessors left off, and consolidate on their achievements, taking the National Population Commission to the next level. This would require total commitment and diligence of the highest order: attributes which I am confident that our new Commissioners epitomize.

Distinguished Ladies and Gentlemen, as we strive to build a strong, united, progressive, and stable nation, we must eschew the temptation to pander to primordial sentiments and divisive tendencies. We shoul*d rather focus on emphasizing the strength of our diversity and the renowned resilience and creativity that mark us apart as a uniquely gifted people. It is in this context that I advise that we must never subject the sensitive issue of census figures and demographics to the expediency of cheap political advantage, with its potential for avoidable discord.

At the same time, members of the Commission must be conscious of the imperative to be guided at all times by the principles of integrity, accountability and transparency, and the need to function in the overall national interest at all times.

As we move towards 2016, the planning for a successful census should commence in earnest. In the meantime, there should be continuous update of the figures and statistics that we have. As a first charge, the Commission should ensure that the vital registration system is completed by 2015.

Beyond providing us with the numbers, it is our expectation that the National Population Commission will be more dynamic in its approach to population matters by providing real time data, which will provide us key economic and social statistics for planning purposes.

I assure you that the Federal Government will be unstinting in its support for you as you face up to the vital task of providing Nigerians with accurate, dependable, and functionally useful demographic data.

While congratulating you all and wishing you every success in your assignment, it is my honour and pleasure to formally inaugurate the National Population Commission to the glory of God and the enduring development of our nation.