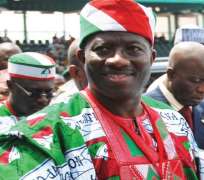 LAGOS, June 26, (THEWILL) – A Lagos-based civil society group dedicated to promoting transparency and accountability in the use of the country’s natural resources has given President Goodluck Jonathan seven days to comply with the Freedom of Information Act by either declaring his assets between May 2007 and May 2012 or facing a law suit that would ultimately compel his compliance.

The group, Socio-Economic Rights and Accountability Project (SERAP), made the demand in a letter couriered to the president on Tuesday morning, describing his aversion — made public during his media chat with select journalists on Sunday night — to asset declaration as a clear desecration of the Nigerian constitution.

The president had stunned the country during the chat when he burst out that he didn’t “give a damn” about declaring his assets because the law was clear about it, and that making his assets public was “no issue,” as he would “not play into the hands” of the people.

“I have nothing to hide,” Jonathan said. “I declared [assets publicly] under the late President Umaru Musa Yar’Adua because he did it, but it is not proper. I could be investigated when I leave office. You don’t need to publicly declare it and it is a matter of principle. It is not the president declaring assets that will change the country.”

SERAP articulated its disappointment in the president’s statement, arguing that it violated both the Nigerian constitution and the UN Convention against Corruption, to which Nigeria is a state party.

“Specifically, Section 153 of the Constitution establishes a Code of Conduct Bureau to ensure, among other things, that all public officers, as defined in Part II of the Fifth Schedule, declare their assets on assuming office and immediately their terms of office expire,” the letter, signed by Adetokunbo Mumuni, executive director of the non-governmental, not-for-profit organisation, said.

“Paragraph Three of Part 1 (A) of the Third Schedule, empowers the Bureau to receive declarations made by all public officers, examine same and keep them in custody. Paragraph 3(C) says the Bureau shall have the power to ‘retain custody of such declarations and make them available for inspection by any citizen of Nigeria on such terms and conditions as the National Assembly may prescribe.’”

It further argued that the UN Convention against Corruption similarly necessitates that public officials deposit information to relevant authorities on their outside activities, employment, investments, assets and substantial gifts or benefits from which a conflict of interest may arise with respect to their functions as public officials.

SERAP lamented that the president’s utterances reflect his government’s lack of political will to lead by example, and to combat the “endemic grand corruption” plaguing the country and besetting its millions of innocent citizens.

“Your statement is also inconsistent with the action of a president who signed into law the Freedom of Information Act. We believe that disclosure of assets is crucial for ensuring that public officers’ personal interests, including that of the president as the leader of the nation, do not conflict with their duties and responsibilities.

“Public disclosure also helps to provide a baseline and, thus, means for comparison to identify assets that may have been corruptly acquired and that a public official may legitimately be asked to account for.”

Continuing, SERAP wrote: “Your statement may also have breached the provisions of chapter two of the 1999 Constitution dealing with Fundamental Objectives and Directive Principles of State Policy, which among others require the government to take steps to eradicate corrupt practices and the abuse of power.

“By virtue of Section 1 (1) of the Freedom of Information (FOI) Act 2011, SERAP is entitled, as of right, to request for or gain access to information, including information on the assets declaration by the president of Nigeria, being a public document within the meaning of the FOI, and which is in the custody or possession of any public official, agency or institution.

“By virtue of Section 4 (a) of the FOI Act when a person makes a request for information from a public official, institution or agency, the public official, institution or urgency to whom the application is directed is under a binding legal obligation to provide the applicant with the information requested for, except as otherwise provided by the Act, within 7 days after the application is received.

“By Sections 2(3)(d)(V) & (4) of the FOI Act, your excellency is under a binding legal duty to ensure that documents containing information relating to your assets declaration are widely disseminated and made readily available to members of the public through various means.”

The group further argued that the requested information does not belong to the class exempted from disclosure by the provisions of the FOI Act. It then expressed hope of receiving the sought information “within seven days of receipt and/or publication of this letter,” after which its registered trustees would be forced to explore relevant legal actions under the Freedom of Information Act to enforce the president’s compliance.