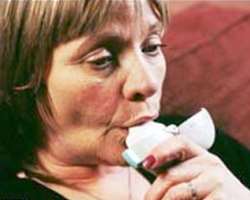 People with COPD often need many medications
Listen to article

People who develop chronic lung disease are more likely to be shorter in height than the general population, University of Nottingham researchers say.

They looked at more than one million people aged over 35 for their study.

They say those with Chronic Obstructive Pulmonary Disease (COPD) were 1.12cm shorter on average.

In the Journal of Epidemiology and Community Health, they write this lack of height may be a "marker" that people have come from a poorer background.

They say that historical studies had shown a strong relationship between adult height and the risk of developing COPD but they wanted to test whether the effect remained today now that living conditions have improved.

They obtained data on 1,025,662 people from a general practice database called the Health Improvement Network.

The association between height and lung disease was strongest in people aged 35 to 49 years and decreased progressively with age.

They say this could be because many of the older generation who suffered from the disease actually died from it in recent years.

Scarring
People with COPD have permanent scarring to the lung tissue caused mostly be smoking.

It is estimated that 3.7 million people in the UK have the disease, but only 900,000 are currently diagnosed.

The researchers think that people who came from poorer backgrounds were more likely to have had mothers who smoked, had poor nutrition during their early years affecting general growth and lung development, and were more likely to live in smoking households and smoke themselves.

Richard Hubbard, professor of respiratory epidemiology at the University of Nottingham, who co-authored the study said: "There's a double whammy associated with deprivation.

"Poorer nutrition in the 'womb' and when growing up as a child can affect general growth and lung development.

"This is combined with an increased likelihood to live with families and peers who smoke - influencing the chance of taking up and sticking with the habit.

"We know that smoking is the principal cause of COPD and all of these factors combined could increase the risk even more."

Professor Mike Morgan, chairman of the British Thoracic Society, said: "We need to make it easier for people from disadvantaged backgrounds to make positive life choices and improvements to their health - whether it be eating well or stopping smoking.

"GPs and primary care professionals could also look out for height alongside smoking status and other chronic lung disease symptoms, to ensure that the disease is caught early."

A Department of Health spokesman said several factors which may affect growth, such as poor nutrition, are also risks for COPD.

"As part of the forthcoming national strategy on COPD we will be investigating how we can best identify these risk factors and take action to either prevent people developing respiratory conditions or halt the progression of the disease once diagnosed." Source: BBC